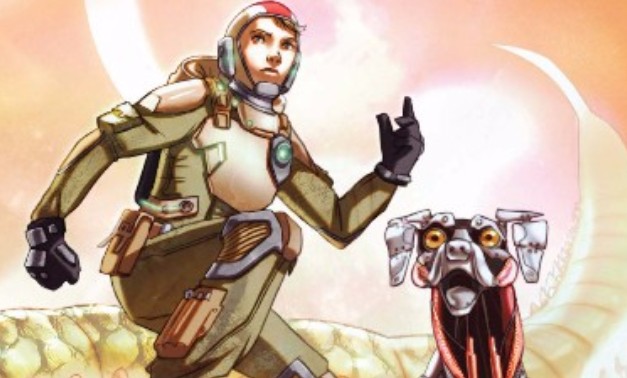 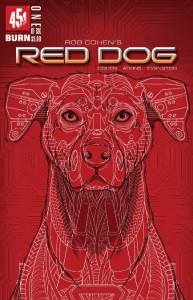 Both Rob Cohen and Andi Ewington deliver a well paced story here. We embark on a journey of the planet Kirawan and what it means to live there. Humans live in this dome shape apparatus because the air quality is so bad on the outside. It’s not that easy to live on Kirawan and readers learn more so why later on. There is a reason why humans are on this planet, a reason that comes at a price.

The story focuses on a young boy named Kyle and his “gift” robot dog named Q (Quantum). Kyle is the only youngster living on this planet. It seems Kyle and Q have a very strong bond to which we learn a bit about, but we will most likely find out more about this bond as each issue comes out. A boy and his best friend.
Kyle has aspirations to work for his dad at the plant. His father seems to reject this idea for reasons readers may assume to know and are probably right about. We go through a skillfully crafted origin of the possible reasons for Kyle’s dad being so resistant to the idea of having Kyle at the plant. Kyle’s dad seems to have pushed off Kyle working at the plant for a long long time, but maybe, just maybe Kyle can have his mother convince his dad 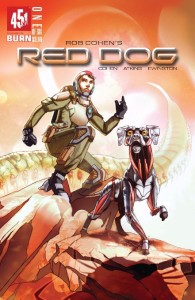 to work at the plant? Will Kyle’s persistence with his mom pay off?

Robert Atkins art is on point in this story. The well written story flows effortlessly as Robert Atkins works the panels to an ebb and flow of ease for the reader to follow. Writers Rob Cohen and Andi Ewington have the dialog in a real life aspect as the reader can relate to. It’s not garbled or full of text to the point you put the book down and get back to it later. There is an ease to turn the pages and read on. We actually care about these characters and want them to be succeed, be safe and survive!

As the reader nears the end of the book, we find ourselves rooting for Kyle. We learn a bit about the Natives, but have no idea who or what they are exactly. Or maybe we do find out?!

Pick up this comic at your local comic shop. Be sure to order it through the Diamond Previews. You’ll be glad you did and you’ll find yourself with a new kid to root for and mans best friend, Red Dog!

Check out these links for 451 Media Group: