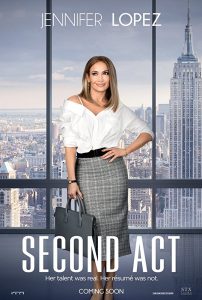 What is it about? Jennifer Lopez stars as Maya, a 40-year-old woman struggling with frustrations from unfulfilled dreams. Until, that is, she gets the chance to prove to Madison Avenue that street smarts are as valuable as book smarts, and that it is never too late for a Second Act.
Review: Jennifer Lopez and Leah Rimini play their parts as buddies to perfection. A sometimes laugh out loud movie with a lot of pulling on the heartstrings as well. The other cast members pull in together nicely as the entire ensemble make for a well spent 104 minutes. One can easily tell this cast had fun making this film. There’s a certain visible glow upon all the faces of the actors and actresses as the movie moves along.
The story itself shifts at a good pace. Although a few plot lines going on at one time, it never felt rushed. The one surprise twist had some audience members gasp a bit. It was very unexpected and welcomed. By the middle of the film we understand much of our main characters issue with herself. We feel the anguish and are very easily emphatic to her feelings. The ending wraps things up in a nice bow.  This reviewer can say, I actually cared for these people. That’s what the movie was supposed to achieve. Learn the balances in life without being preached to about how to do it. Be entertained while watching and not feel as though there was some motive behind the message. Looking forward to the next offering from writer Justin Zackham and director Peter Segal.
Sound: Several oldies radio music, some modern music and a Salt and Pepa song!