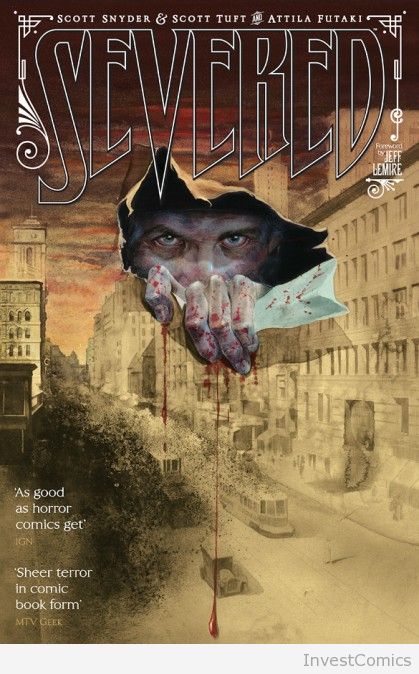 In 1916, twelve-year-old Jack Garron’s boxcar-hopping adventure turns into a flight from a ravenous, razor-toothed man who haunts the shadows. SEVERED (FEB120457), the Image Comics series that captures all of our childhood fear, has been collected into a hardcover collection that will go on sale on April 11.

Eisner-Award-winner Scott Snyder (American Vampire) and Scott Tuft weave a tale that conjures up what they describe as “the deep fright that you have as a kid, the kind that takes your breath away, makes your spine tingle… A primal fear.”

New York Times bestselling artist Attila Futaki (Percy Jackson) matches their story with art rich with historical details and subtle characterization, capturing both the hope of youth and the terror of the unknown. The hardcover collection includes pages originally in issue four of the series that have been re-inked and colored.

IGN called SEVERED “As good as horror comics get,” and MTV Geek described it as “sheer terror in comic book form.”

“I just read through the collected SEVERED and I’m so proud of this book,” said Snyder. “I think it might read even better as a collected book than the single issues and I cant wait for our existing fans to experience it this way. I am also excited for new fans to discover SEVERED for the first time.”

“We couldn’t be happier with the way that the collected SEVERED has come together,” added Tuft. “The bonus material looks great and we are so happy with the design of the book. Steven Finch, our designer, did a fantastic job. We’re also thrilled to have an introduction from the great Jeff Lemire who has been supportive from the
beginning even introducing us Scotts to Attila.”

Snyder and Tuft will both be in attendance at this weekend’s WonderCon in Anneheim, where Snyder will be a special guest.