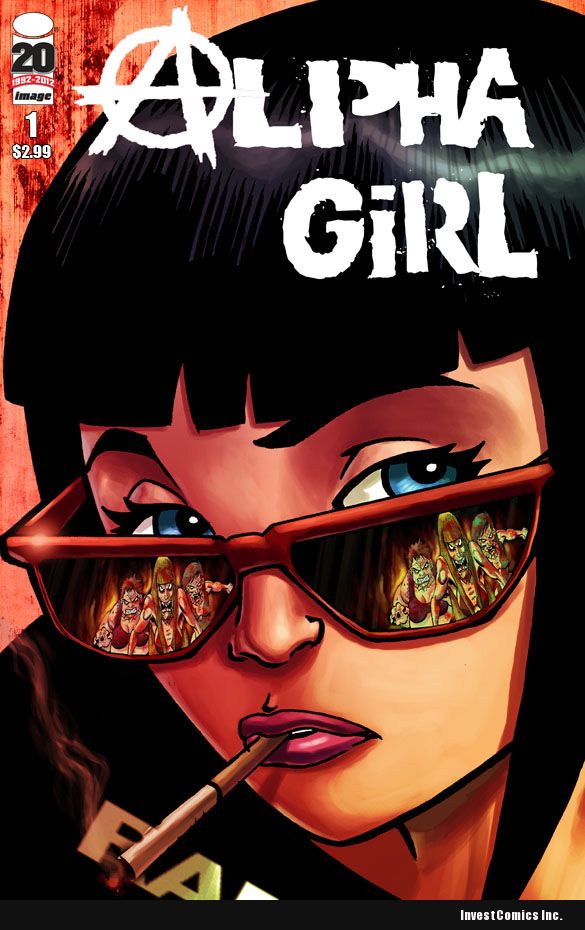 Berkeley, CA – 7 December 2011 — In Judith’s short life, the street smart punk has already proved to be a survivor, but now she’ll have to fight to remain the last one standing!

In the upcoming ALPHA GIRL miniseries, co-creators Jeff Roenning and Jean-Paul Bonjour are plotting plenty of trouble for Judith. Robert Love is illustrating Judith’s close calls with the masses of flesh-hungry zombie women and the men who hunt them. ALPHA GIRL promises to be the action-packed gore fest that you’ve been waiting for!

“When I got hooked on comics in 1980 I quickly found that the best titles were
relegated to the 25 cent box. Creepy, Tales From The Crypt, and Ghostly Tales were my favorites, but they never went far enough,” explained Roenning. “ALPHA GIRL has been a chance to not only quench my blood lust, but to do it with a kick ass
heroine.”

“As a child of the 1980’s, it has been a blast drawing a comic that takes place
during my formative years,” said Love. “The Adidas track suits, big hair, and the
’80’s rock ‘n’ roll and hip hop – I’m definitely having fun!”

“I cut class my sophomore year of high school to go hang out, smoke cigarettes, and
check out girls. I ended up watching a movie called Evil Dead 2. When I saw that
flick I had found my calling in life,” added Bonjour. “When Roenning approached me
with the concept of a cosmetic company turning all women into man-eaters, with a
kick ass protagonist like Judith, I was all in. If you’re like me and a fan of the
zombie horror genre when the lead character has a flash of attitude, you are in for
a hell of a ride.”

This “Return of the Living Dead meets Zombieland” new miniseries will appeal to fans
of the dark humor and horrors of CHEW and HACK/SLASH. For those that can’t wait
until February, Cassie Hack fans will discover another kick ass femme fatale in the
back pages of HACK/SLASH #11, where we’re sharing a sneak peek of ALPHA GIRL #1!

ABOUT JEFF ROENNING
Jeff Roenning studied film at NYU’s Tisch School of the Arts where he was mentored
by famed screenwriter Bennet Simms (Blazing Saddles, etc.). He has written numerous
scripts, including an episode of Tales from the Crypt. He graduated in 1992 and
began working in post-production, and worked on such films as Nora Ephron’s Michael
and Strip Tease. During that time, Jeff also took the prestigious position of boom
operator on the cult classic Tromeo and Juliet. In 1997 he went to Sony studios to
work on digital archiving and the fledgling DVD spec under Malcolm Davidson, and in
1999 he moved over to DVD software pioneer Sonic Solutions. Jeff’s 2008 debut horror
film Hot Baby broke new ground in the schlock genre. Unbelievably, it’s still rated
FRESH on Rotten Tomatoes. Jeff’s experience there would lead him to work on the
Oscar winning DVD Traffic and the award winning Beastie Boys Video Anthology. He has
worked on over 100 titles to date and is credited as a pioneer in bringing the surf
film genre to DVD.

ABOUT ROBERT LOVE
Robert Love formed Gettosake Entertainment with his brothers, Jeremy and Maurice in
1998, publishing their signature character CHOCOLATE THUNDER. In 2004, Dark Horse
published FIERCE, written by Jeremy Love with art by Robert Love, followed by SHADOW
ROCK in February of 2007. Robert’s stories “The Blind Monkey Style” and “The Mad
Mauler” appeared in POPGUN VOLUMES 1 and 4 respectively. Outside of comics, he sold
the rights to a movie to 20th Century Fox called THE ADVENTURES OF VENUS KINCAID and
has also optioned several other projects with Cartoon Network and the Disney
Channel.

ABOUT JEAN-PAUL BONJOUR
Jean-Paul Bonjour (yes, that’s his real name) is in fact a real person. He is not so
much French as he is a victim of being born and raised in Berkeley, California. He
attended NYU’s Tisch School of the Arts. There he met and befriended Harmony Korine
and worked on the film Kids while pursuing his other passion in photography. After
graduating film school he moved to Los Angeles to work for Andrew Lazar at Dino De
Lorentis on Army Of Darkness. Quickly however, he realized that the independent film
and punk music scene that he grew up with was where his true passions lived. His
independent short film and photography work was noticed by Apple Computer who
offered him a position in 2000. He has been stuck working at a desk job, trying to
democratize film making, one donut at a time ever since.

Jean-Paul’s photography has been published in such notable magazines as Slap,
Thrasher, DV, and Wired Magazine as well as a few hundred trashy punk ‘zines. He
shares a 2002 technical Emmy for his work on Final Cut Pro, as well as a Bay Area
Music Award 1999. He has had his films optioned to Apple Computer, HDNet, Sundance
Channel, and in 2005 earned a trip to the Sundance Film Festival. He lives in
Oakland, California with his daughter and fellow S-Mart shopper Sylvie Blue.

2 thoughts on “SHOWING THEM WHO’S ALPHA”