BERKELEY, CA — 13 May, 2011 — Erik Larsen’s Savage Dragon is celebrating the 175th issue of his long-running Image Comics title this August… or is he? After being killed not once but three times in the past 30 issues, readers might be wondering if the green-skinned, fin-headed freak that awakes in SAVAGE DRAGON #175 to find himself rocketing through space is actually the real deal… but they’ll have to read this special 48-page anniversary issue to find out for sure!
“I’ve really run Dragon through the ringer over the last few years,” Larsen explained. “Even though he’d essentially been killed by a mind-and-body-snatching monster called Virus back in issue #147 and then again by Overlord in #150, when it came to wrapping up the ‘Emperor Dragon’ saga, it became pretty clear that even with all the body-switching shenanigans, things couldn’t just go back to the way they were.

“I knew he had to die… but what then? After focusing on Dragon’s son Malcolm for several issues, SAVAGE DRAGON #175 answers that question. Definitively, I hope!”
Written, penciled and inked by Larsen, with a Vanguard back-up story by writer Gary Carlson and artist Frank Fosco, SAVAGE DRAGON #175 promises to set the stage for the next several years’ worth of Dragon tales.
The story itself focuses both on Malcolm Dragon, as he faces his greatest challenge yet in the form of the nigh-omnipotent Overlord, while someone who looks an awful lot like his dead father tries to make sense of a new life and a new reality when he finds himself aboard a spaceship headed for parts unknown.

“There are some who confuse what Erik’s doing on SAVAGE DRAGON with standard rock ’em, sock ’em superhero stuff, but like Mark Millar’s Kick-Ass and Robert Kirkman’s INVINCIBLE, this is a series that constantly pushes the boundaries,” said Image Comics Publisher Eric Stephenson. “Very few superhero comics are as uncompromising or as propelled by change as SAVAGE DRAGON, and nearly 20 years after it first began, it’s still one of my favorite superhero comics ever.” 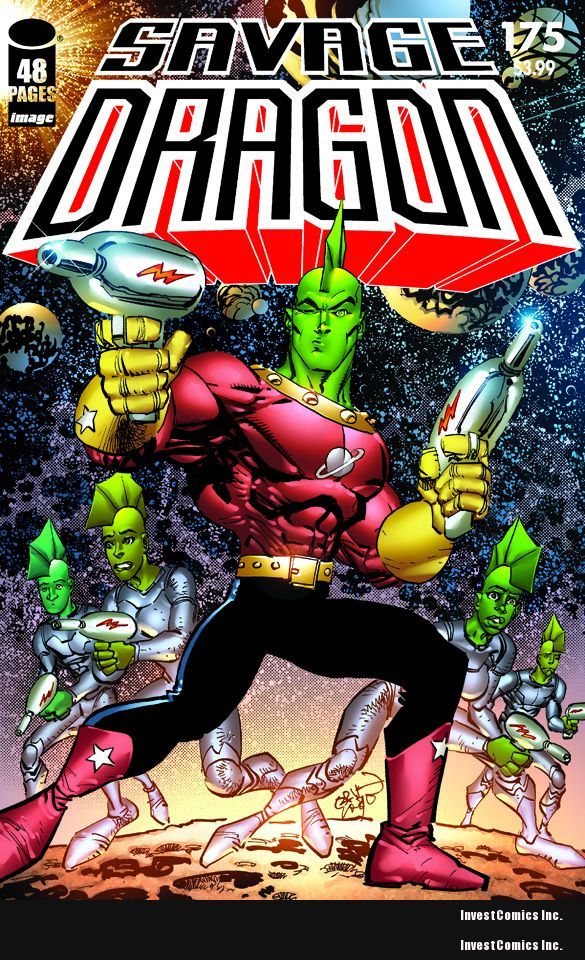