Spider-Woman Motion Comic Is A Hit On iTunes! 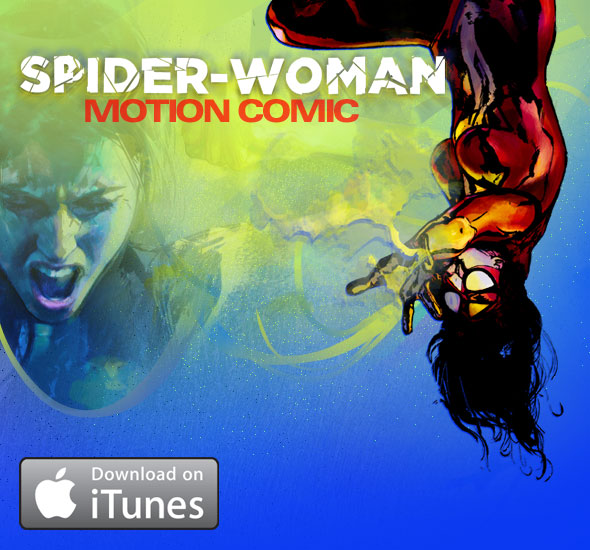 Marvel is pleased to announce that the first episode of Spider-Woman Motion Comic has conquered iTunes, debuting as the #1 episode on the Television-Animation sales chart and as the #2 episode on the Top Television Episodes sales chart. The New York Times Best-Selling team of Brian Michael Bendis and Alex Maleev (Halo Uprising) present Marvel’s first ever original motion comic as Spider-Woman embarks on a new mission that’ll change the Marvel Universe forever! With national coverage from MTV to the LA Times, everyone’s talking about the first episode of the Spider-Woman Motion Comic, available now on iTunes!

“To wake up this morning and see Spider-Woman ranked so high on the iTunes charts is crazy insane to me,” gushed Brian Michael Bendis. “Thanks to all the readers, and especially the motion comics first timers, who tried us out and than hit the subscribe button. To quote the Stan: you ain’t seen nothing yet!”

“I’m thrilled to see fans responding so enthusiastically to Marvel’s first motion comic,” said Alex Maleev. “Thanks to all the fans who’ve purchased Spider-Woman and I can’t wait till you see what’s next!”

John Dokes, Vice President, Sales and Marketing- Digital Media said, “Everyone at Marvel is proud of the Spider-Woman motion comic and this superb launch has exceeded all our expectations. Brian and Alex, have re-energized the geek in me—you have to see this for yourself!”

Fans can purchase the first episode of Spider-Woman on iTunes at http://itunes.apple.com/WebObjects/MZStore.woa/wa/viewTVSeason?id=325963894&s=143441 now! For more information on motion comics please visit Marvel.com at www.marvel.com/motioncomics