If you’ve ever received a cartoon version of yourself as a gift chances are Steven Duquette did the work. His website, Cartoon Portraits, proudly displays samples of his work. You can actually purchase his services and he will draw for you a caricature of the person of your choosing. It can be your favorite birthday boy or even yourself.

In 1990 Steven received the Commercial Award from the National Cartoonist Society and he’s been busy ever since. But let’s hear it– er… read it in his own words.

Even as a kid I found myself at the opposite end of a 2B Venus pencil.  I drew my way thorugh high school, the Navy and severall art schools.  I came to NYC from L.A. to sell cartoons to the major mags and I did.  I free-lanced by doing cartoon illstrustration
for different ad agencies and art studios.  I tried to syndicate but always came up with an idea that was ahead of its time or didn’t meet a demograhic need.  For awhile I did the caricature scene working parties, etc.  After awhile, I got tired of drawing moving heads and I switched to working from  given photos as they don’t move nor talk back. I then promoted CARTOON PORTRAITS and am busy drawing them for the past ten years.  I have my own webite  and I showcase my work on FaceBook. As long as I can keep these creative juices flowing I’ll keep on drawing because I feel that if ya’ snooze ya’ lose!   ~Steven Duquette 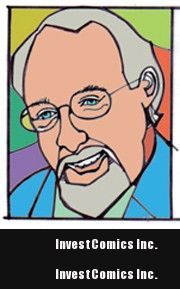 Steven’s bringing to IC Web Comics a unique series. Not only unique in its art and craftsmanship, but also it’s perspective. BOIDTAWKIN is a quirky look at birds. The cartoonist himself explains it best.

I find  birds to be interesting creatures. I will confess that I’m not an ardent bird watcher but they fascinate me.  I would watch a grouping gather under my bird feeders  and they can remind me of human beings,  They are territorial, humorous, sexual and full of mischief.  I would then think of them in conversation.  The swallow is making at a nuthatcher as well as a cardinal chasing a wren after a morsel of food. This idea gave  birth to my cartoon panel, BOIDTAWKIN.
The rendering of the panels are done with the use of colored papers that are cut out in different shapes and pasted down in forms of bird shapes and then a fine colored line is drawn to bring out the definition of the feathers, etc.   This gives them a unique look as for color, design, style and humor.  They’ re fiished off with a gag line that would give them something to talk about, thus you have BOIDTAWKIN! Let’s listen in…

Visit Steven’s site  http://cartoonportraits.bizland.com/  today and get yourself caricatured. And look him up on FaceBook.