What is it about? American Senator Gary Hart’s presidential campaign in 1988 is derailed when he’s caught in a scandalous love affair. 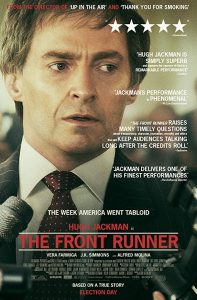 Review: Any adult that lived within this tremulous political time during the year of 1988, remembers the uneasy anguish of watching a politician fall from grace the way Gary Hart did. On top of the world, essentially being dubbed as the next United States president before the race even started. He was so far ahead of the pack, that most felt this could be the biggest landslide in the history of a presidential race. That’s how far ahead he was. Now, as a reviewer that actually did in fact live through this scandal, at the precious age of 18, I can say, it was exciting to watch this unfold in real time. Being an adult now, it seems more uneasy, only because you realize how many people are getting hurt during the process of this man’s downfall. This movie made me relive this moment in time all over again. It hurts more now than it did back in 88. The pain Lee Hart must have endured (Gary’s wife), played brilliantly by Vera Farmiga, was felt by most in the audience. J.K. Simmons plays campaign manager Bill Dixon on a level only Mr. Simmons can do. Does this man ever have an off day? Absolute highlight of this film. Hugh Jackman (Gary Hart) was a meek shadow of himself compared to the ‘brawnier’ roles he’s starred in. A showing of guilt, fear and anger. However, he did have a love for his country. Blinded by the fact that “private lives” in politics were to change in a dramatic way in 1988. One huge takeaway from this film, it was the beginning of the end of politics as we know it today. Politicians were now going to be graded on their moral compass a bit more. Their private lives were now fair game, even more so. Gary Hart was stuck in a time machine thinking Americans didn’t or wouldn’t care about his “alleged” affair with Donna Rice. Sara Paxton as Donna Rice, almost portrayed as a victim in certain points of the movie. At times the audience was in tune too with Ms. Rice, understanding her conflict. Whichever side you stood on, the director wanted to make sure we understood that there was another person involved within this scandal. Their life ruined. Many were left feeling a bit empty with Donna Rice. It wasn’t convincing enough to ensure the viewers care enough about her. It fell a bit short, as did this film, for the older audience. The predictability was off the charts here. Watching and waiting for each scene to unfold, but realizing you may have lived this story already (which they have). For the older audience this holds very true, for the younger audience, this may be a new story to them. A history lesson or sorts. The movie comes out during a different era in politics. It seems as though the purposeful timing of release is trying to send a message. Whether the audience understands the message or not, well that will probably all depend on which side of the aisle you stand on. But, one thing we can all agree on and that is the political landscape seriously entered into the entertainment arena in 1988.
Sound: Score kept revisiting a “clapping” chime. At times went on too long.