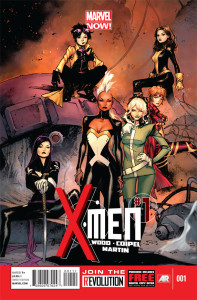 The Future of X-MEN Is Marvel NOW!Superstars Brian Wood and Olivier Coipel Storm Comic Shops With A New Mutant Team! New York. NY—January 14th, 2013— This April, Storm, Rogue, Jubilee, Kitty Pryde, Rachel Grey, Rogue & Psylocke redefine what it means to be a Child of the Arom  in X-Men #1, kicking off the all-new ongoing series by  the blockbuster creative team of writer Brian Wood (Ultimate Comics X-Men) and artist Oliver Coipel (Avengers VS. X-Men)! As part of Marvel NOW!, X-Men  joins a number of titles that will take the Marvel Universe in an exciting all-new direction, as the industry’s top creators join the top Super Heroes to deliver all-new ongoing series, great for new and lapsed readers alike! An old enemy shows up at the X-Men’s door, seeking asylum from an ancient evil come back to Earth. Meanwhile, Jubilee has come home, and she’s brought with her an orphaned baby who might hold the key to the Earth’s survival…or its destruction! With an imminent alien invasion and an eons-spanning war between brother and sister around the corner, Storm steps up and puts together a team to protect the child and stop a new threat that could destroy all life in the Marvel Universe! “This April, double X marks the spot,” said Axel Alonso, Editor In Chief, Marvel Entertainment. “The most popular and powerful female mutants will band together to form a team that’s much more than the sum of its parts, battling for stakes that couldn’t be higher.  It’s a mind-bending, heart-pumping, thought-provoking saga that only Brian Wood and Olivier Coipel could tell.” Marvel NOW! is the culmination of Marvel ReEvolution, the groundbreaking new initiative to evolve the comic book experience through innovation. With X-Men, Marvel NOW! ensures fans will discover an entirely new perspective in the adventures of a brand new team. “How perfect is this?  A phenomenal cast of iconic women, powerful, beautiful, multi-faceted characters… this is the X-Men to me, and I’m writing a series to match,” said writer Brian Wood. “ This is an action comic with classic villains like Mark 1 Sentinels, as well as new twists on others (Sublime has a sister?). I love the X-Men – I have since my time on Generation X twelve years ago – and this is kind of as good as it gets for me.  And if I do my job right, it’ll be the same for X-Men fans.  And wait ’till the last page of #1, when ****** ********* shows up.” Each issue of X-Men includes a code for a free digital copy on the Marvel Comics app (for iPhone®, iPad®, iPad Touch® & Android devices). Additionally, each issue of X-Men  features special augmented reality content available exclusive through the Marvel AR app – including cover recaps, behind the scenes features and more that add value to your reading experience at no additional cost. “Not only does every book with the Marvel NOW! logo feature a new superstar creative team and blockbuster story, but they also come with all-new incentives for our retailer partners,” explained David Gabriel, Senior Vice-President of Sales, Marvel Entertainment.. “We want to make sure every comic shop nationwide is fully stocked to meet the high demand we’re already seeing for Marvel NOW! And want to make sure their voices are heard throughout this exciting time. Stay tuned for more news on how Marvel will be working directly with retailers to make sure our programs address their needs.” An all-new direction! All-new threats! All-new team! This is X-Men NOW! This April, Brian Wood and Olivier Coipel usher in a new age for Mutantkind in X-Men #1! For more on Marvel NOW!, please visit now.marvel.comand join the conversation on Twitter using #MarvelNOW. *Retailers should keep an eye on the Marvel Mailer and Diamond daily for special announcements concerning Marvel NOW! X-MEN #1
Written by BRIAN WOODArt & Cover by OLIVIER COIPELON SALE APRIL 2013! To find a comic shop near you, visit www.comicshoplocator.comor call 1-888-comicbook.