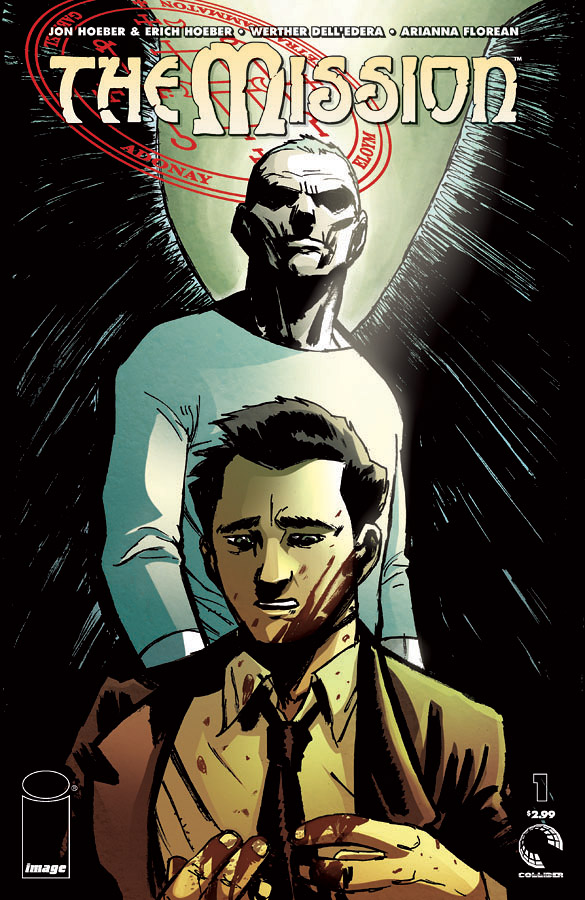 Berkeley, CA – 17 November, 2010 – An average man gets sent on a heavenly task this February in THE MISSION, from Marc Guggenheim’s Collider Entertainment.
In THE MISSION, a typical working guy finds his life upended when he’s approached by a mysterious figure who claims to be the archangel Gabriel. Gabriel tells him he’s been chosen for a mission in the battle between good and evil.
The mission? Murder! Did our hero actually get a command from an angel or is he losing his mind?
Written by JON HOEBER and ERICH HOEBER, who wrote the screenplays for Red and Battleship, THE MISSION is produced by ALISA TAGER (HALCYON, Serenity) and MARC GUGGENHEIM (HALCYON, No Ordinary Family). The series is stunningly illustrated by WERTHER DELL’EDERA (Dark Entries, Loveless) and colored by ARIANNA FLOREAN.
“Jon and Erich have written the perfect supernatural thriller,” says Guggenheim. “People have questioned the existence of God and angels for millennia, but the main character of THE MISSION has to face the reality of this conundrum, and the twists and turns will have the readers guessing as well. Werther’s art is a flawless companion to the story, putting into pictures the discord our hero confronts.”
Whether the battle is between good and evil or between sanity and lunacy, it begins in THE MISSION #1 (DEC100433), a 32-page full-color comic book for $2.99, will be in stores February 23, 2011. Collider Entertainment’s first release with Image Comics, HALCYON #1, is available now.
Image Comics is a comic book and graphic novel publisher founded in 1992 by a collective of best-selling artists. Image has since gone on to become one of the largest comics publishers in the United States. Image currently has five partners: Robert Kirkman, Erik Larsen, Todd McFarlane, Marc Silvestri and Jim Valentino. It consists of five major houses: Todd McFarlane Productions, Top Cow Productions, Shadowline, Skybound and Image Central. Image publishes comics and graphic novels in nearly every genre, sub-genre, and style imaginable. It offers science fiction, romance, horror, crime fiction, historical fiction, humor and more by the finest artists and writers working in the medium today. For more information, visit www.imagecomics.com.