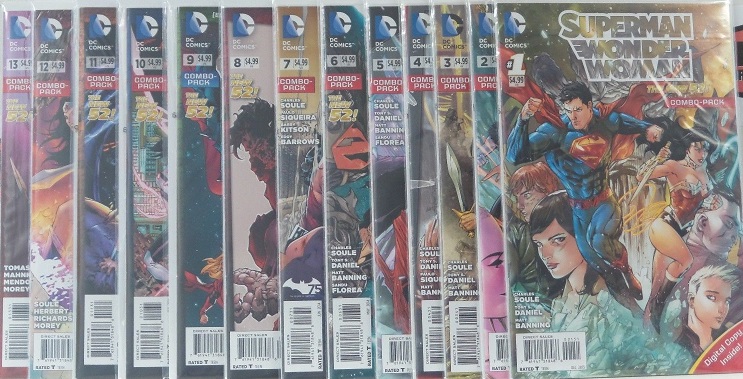 In 2011 DC started marketing the Combo Pack which was a bagged edition of their most popular comics with the price $1.00 higher than the regular cover with the digital code included to download a copy of the comic.

DC released hundreds of comics in this format over the next 3 1/2 years but it appears to be coming to an end. Sales on these marked up combo packs is very low – these might be the future collectible comics as the print runs are potentially only 5% the print run of the regular cover.

These have never been seen as a collectible which gives them the great opportunity to actually become one once collectors realize how few of these are out there. Plus how many people actually bought these and then opened up the bag so bagged versions could even be scarcer.

Since then sales have just slowly been falling though many more titles have been added.
The last Combo Pack to actually chart on the Diamond Top 300 best selling comics was
Batman #31 way back in May 2014 with only 1,600 copies ordered by retailers with a $4.99 cover price

That means the print run of the combo pack is only approximately 1% of the regular cover !!!!!

It only ranked #400 of the month. Since then no combo packs have made the chart so it could be possible that the average print run of the combo packs in early 2015 might only be 1,000 copies each.
That makes these combo pack covers as rare as any high profile variant cover !!!

My guess is that the final combo pack releases of Superman Wonder Woman will be the ultra rarest Combo Packs ever released and might be as low as a print run of 350 copies each.

Either the line is being totally cancelled due to poor sales OR DC has simply decided not to release any during Summer 2015 due to Convergence as all their regular titles are not being published.

Its only time before collectors start to realize how hard these are to find. Now Diamond sometimes has some of these still in stock so your local retailer might be order some of the more recent issues still.