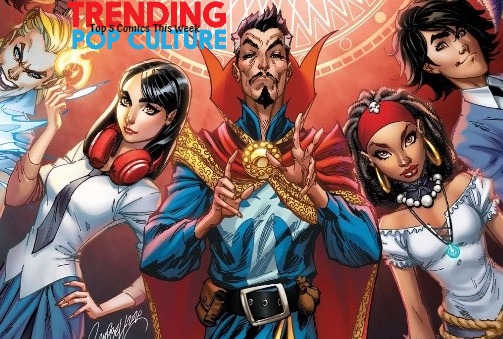 Strange Academy #1 – Xavier’s school for the gifted will have direct competition beginning this week. This gifted school houses the young sorcerers yet to hone their skill-set. Doctor Strange opens school on Wednesday, March 3rd, 2020. What a fantastic idea for a comic series. Look for this comic to hit its stride immediately with comic fans. Two huge fan favorites and massive talents bring the series to life in its debut issue; Writer Skottie Young and artist Humberto Ramos.
Flash #750 – The Flash comic hits a pinnacle seven hundredth and fiftieth issue. Paradox (new villain debuted in the previous comic) is causing all kinds of problems for Flash in this anniversary issue.
Spider-Man Noir #1 – Always a bit strange to see Spider-Man with handguns. Like seeing Batman with Handguns. Just odd. Whenever a comic reader sees this, they know there are three things to occur. One, there is an alternate story happening. Two, a dream sequence will occur, or three there is a damn good reason for these characters to be wielding a handgun. Spidey enters the alternate timeline here. Writer Margaret Stohl and artist Juan Ferreyra.
Batman #90 – Last week it was the “full” debut of Punchline. This week it’s the “full” first appearance of the new character; Designer. Will this debut cause a ruckus in the aftermarket like Punchline did? Probably not, but still a debut in a Batman comic nonetheless. Plus, Catwoman has a very big secret/reveal.
Mercy #1 – New series from Image Comics from writer/artist Mirka Andolfo. Stanley Lau provides a cover.

Here are the rest of the trending comics and items headed your way this Wednesday from Trending Comics, Best Cover Art, Trending Collectibles And  MORE #617 (LOTS MORE there!)