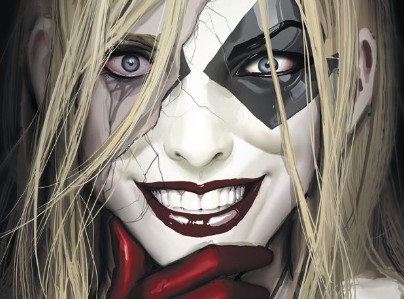 SINCE 2005. Here are this week’s top trending comic books and new items headed your way this Wednesday 9-25-19
Click on the RED links, Images or the comic cover to buy/bid from All available sellers on Ebay
Please note: New comic book releases and all items are subject to change

Harleen #1 – What would you get when you mix one of the hottest DC characters with the Black Label imprint? You get an instant hit. An unfiltered Harley Quinn comic? Yes, please. Written and drawn by superstar creator Stjepan Sejic. This book will sell out quick, so get your copy before you’re in line for that second print you really don’t want.
Batman/Superman #2 – In the previous issue, fans witnessed the birth of “The Shazam Who Laughs” on the last page (See the actual page to the right–> Click it to buy/bid the first look at The Shazam Who Laughs). This counts as a cameo, correct? Who knows with the on again off again “rules” of the collection world. Anywho, the new release this Wednesday may count as the first “full” appearance of the new character. Creators Joshua Williamson and David Marquez.
Action Comics #1015 – When Trending Pop Culture (or was it InvestComics?) gave fans a heads up regarding DC’s new character Naomi, fans responded. Now we’ll truly see if Naomi is a character to be followed/reckoned with this Wednesday. Let’s see if Action Comics #1015 trends on the social media outlets as well as her debut did. Oh, an explanation as to why this particular book will probably trend would be nice. Creator of the Naomi character; Brian Michael Bendis, will introduce her to the DC Universe (outside of her series). With a splash cover like this one, she’s bound to turn some collector heads around. Art by Szymon Kudranski.
Strikeforce #1 – The title of this comic sounds like an old 90’s Image Comic. But this is far and away from being anything as cheeseball as that would have been. Blade will recruit a new Marvel team consisting of Spider-Woman, Angela, Winter Soldier, Wiccan, Monica Rambeau, Daimon Hellstrom and of course Blade himself. That’s a large group, isn’t it? How long before someone is offed to make the team an even number? Writer Tini Howard and German Peralta will bring some much needed new blood to a new team within the readers market. Look for consistency here with great storytelling and art to keep the interest flowing.
Amazing Spider-Man #30 – An Absolute Carnage tie-in. Comic collectors are loving this story thus-far and it’s full steam ahead. Writer Nick Spencer and artist Ryan Ottley.

Power Of X #5 – Every week, anything involving Jonathan Hickman’s new X-Men status quo will be featured here on TPC. The story is completely kicking everyone’s as* and it’s a major deal for the X-Men moving forward. Look for any, some, or ALL of the new way making it into the new X-Men films from Disney in the future. It’s possible, not saying it’ll happen, but it’s very possible. Get on top of the Jonathan Hickman X-Men and enjoy this storyline, it really is fantastic and could be history in the making.
Absolute Carnage: Miles Morales #2 – Speaking of a comic storyline making it to film, writer Donny Cates is killing it with his “Absolute Carnage” story. This Wednesday it crosses over to this comic. Maybe a Disney animation of this story headed to the Disney+ streaming network one day? Writer Saladin Ahmed and artist Federico Vincentini bring this tale to life.
Shazam! #7 – A new character is introduced. Writer Geoff Johns and artist Dale Eaglesham.
Teenage Mutant Ninja Turtles #98 – The lead up to the one hundredth issue is almost upon us. Till then, read up on major happenings/changes going down within the TMNT universe. Writers Tom Waltz and Kevin Eastman, artist Michael Dialynas.
Avengers #24 – The Avengers vs. Cosmic Ghost Rider. Nuff said. Writer Jason Aaron and artist Stefano Caselli.
New Mutants: War Children #1 – If you were a fan of the New Mutants team back in the early 80’s/early 90’s, then you should be extremely happy with this new release on Wednesday. If you are not too familiar about the New Mutants, this will be a good starting point. Super legends, Bill Sienkiewicz and Chris Claremont contribute to make this “lost story” from the original team of yesteryear. After you finish reading this instant classic, go back and buy up the original series. You’ll find Sienkiewicz and Claremont on many of the books.
SFSX: Safe Sex #1 – A new Image Comics series from writer Tina Horn and artist Michael Dowling. Image Comics says it reads like their “Sex Criminals” series, so that’s a big positive.

Avengers: Loki Unleashed #1 – Just as the New Mutants takes place in their time line from many years ago, this comic does the same. Legends, Ron Lim and Roger Stern on this one. What a great week to be a fan.
Wolverine Annual #1 – Writer Jody Houser and artist Geraldo Borges bring the story of Morgan Le Fay vs Wolverine. Yes, please. Thank you.
Ghost Spider #2 – Be on the look out for a possible introduction of a character or two. Writer Seanan McGuire and artist Takeshi Miyazawa.
Bloodshot #1 – With the new Sony film just beyond the horizon next year, many early callings of a huge blockbuster, Valiant Entertainment will try to inundate fans with a lot of Bloodshot comic releases. Nothing wrong with that! This will include many number one issues on a regular basis until film release day. So, with the new number one, writer Tim Seeley and Brett Booth team up to bring a new(?) character named Black Bar. We’re on board and you should be too.
Midnight Sky #1 – One of two number one releases from Scout Comics this week. Writer James Pruett and Scott Van Domelen.
The Forever Maps #1 – Scout Comics; Michael Lagace and Todor Hristov.
Relics Of Youth #1 –  Vault Comics; Creators, Chad Rebmann, Matt Nicholas and Skylar Partridge.
The Plot #1 –  Vault Comics; Michael Moreci, Tim Daniels and Josh Hixson.
Gods and Gears #1 –  Alterna Comics. Creator Ryan A. Winn.

US Navy confirms UFO videos are the real deal