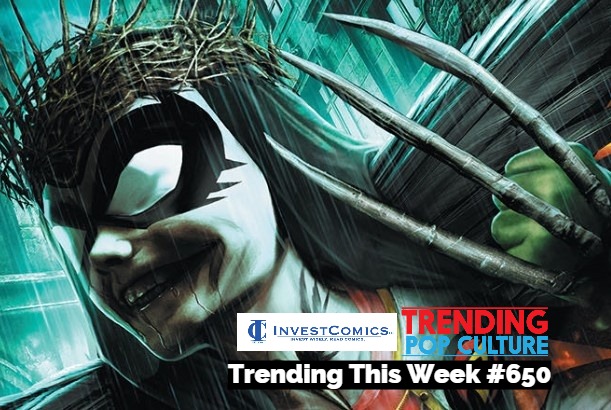 InvestComics/Trending Pop Culture; SINCE 2005.
Here are this week’s top Trending Comics, Best Cover Art, and Trending Collectibles headed your way this Wednesday 10-21-20
Click on the RED links, Images, or the comic cover to buy/bid from All available sellers on eBay
Please note: New comic book releases and all items are subject to change.

Batman #101 – Meet Batman’s new partner, the Grifter. This isn’t the first time they’ve met up. Back in 2008, they appeared together in DC/Wildstorm’s Dreamwar #1.
Fantastic Four #25 – A new villain is introduced, new costumes, and a major status quo change for the Fantastic Four team.
White Knight Presents Harley Quinn #1 – Remember when that White Knight Batman book caused a ruckus about a year ago (or less) in the aftermarket for a bit. We even forgot why it did, but this Black Label Harley Quinn offers up a story regarding Harley Quinn’s children. They appear right on the cover as well. One day, when DC introduces Harley’s kid(s) into the mix, this comic will be the go-to. Creator Katana Collins writes and draws. Sean Murphy cover.
Justice League #55 – This issue will introduce a new villain.
Dark Knights Death Metal Robin King #1 – Robin King displays his Wolverine claws as DC pushes their love for this new character. Will fans reciprocate and bring Robin King to the next level? Peter J. Tomasi and Tony Patrick write. Art by Daniel Sampere and Riley Rossmo.

Catwoman #26 – A new villain is introduced.
Savage Dragon #253 – There are two sure things in the comic book industry. No character stays dead forever and Erik Larsen doesn’t give a f*** what you think. With such a fragile, emotional political landscape these days, Erik is proud (obviously) to offer up a variant cover letting readers know whose side he is on. This cover will be the first mainstream comic to display the Biden/Harris team.
Iron Man #2 – Every single week we inform readers (speculators) about the Marvel Fortnite variant covers. And every week we remind readers (speculators) that if just ONE of these Fortnite characters ever makes it to the inside of a Marvel comic, the first appearance cover will be a hot ticket. Notwithstanding, The Man-Thing will be on an Iron Man variant wearing the Iron Man gear. Really? Yes. The Iron Man-Thing. Boy, that doesn’t sound right.
Spider-Woman #5 – Celebrating the 100th Spider-Woman, there will be a bunch of variants available. One variant cover makes Spider-Woman a werewolf. A first appearance for the cover chasers.
Scumbag #1 – The name alone is enough to peek the interest of some. A drug-addicted, foul-mouthed, non-educated biker gets superpowers and is the only one that can save humanity. Okay. This new Image Comics series will be written by Rick Remender and drawn by a different artist every issue. The first issue will be Moreno DiNisio.

Venom #29 – Will this series ever cool down? Venom and Thor are the two hottest Marvel titles and they are both written by Donny Cates.
Nightwing #75 – Nightwing is back! Dan Jurgens writes and Ronan Cliquet pencils.
Werewolf By Night #1 – Back in 1972 when this series first debuted, it wasn’t until 31 issues later that the readers really got a hold of a character they truly embraced. Moon Knight made his debut in Werewolf By Night #32 and Marvel immediately started their Moon Knight insurgence. Appearing in multiple issues, then appearing in a Marvel Spotlight issue, then having a solo book. Werewolf By Night was left long behind. But this really isn’t about Moon Knight right now. Werewolf By Night is reintroduced to fans here by writers Tabo and Benjamin Jackendoff. Scot Eaton provides the visuals.
Madame Satan #1 – Archie Comics sure have come a long way. You imagine this title from Archie in 1978? It would never happen. In 2020, it does. Check out Madame Satans first appearance in Chilling Adventures of Sabrina #2.
Dune House Atreides #1 – With the new Dune set to drop soon (whenever or wherever that happens is anyone’s guess), here’s a great precursor to the film. Writers Kevin J. Anderson and Brian Herbert. Art by Dev Pramanik.