Only a limited number of copies remain of the first comprehensive look at the classic Dell, Gold Key, and DC Comics artist.

(RALEIGH, NC) Last July, TwoMorrows Publishing released Dan Spiegle: A Life In Comic Art, co-written by Spiegle and historian John Coates (author of The Art of Nick Cardy). The book, which has garnered rave reviews from historians and fans alike, has seen the majority of its remaining copies destroyed in a warehouse fire. 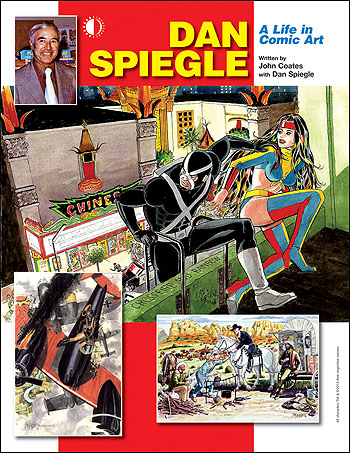 “It’s disheartening to have something like this happen,” commented TwoMorrows publisher John Morrow. “We routinely overprint books and have our printer store them for us, only keeping a limited number of copies at our headquarters in North Carolina. In this instance, our printer had a warehouse fire, and we lost hundreds of copies of our Dan Spiegle book.” The remaining copies are available for sale through www.twomorrows.com, as well as Diamond Comic Distributors and Amazon.com, but are likely to sell out soon. “While it’s been incredibly well received, this isn’t a book that we’re likely to reprint since so many customers purchased it when it was first released. So readers should take this opportunity to grab a copy now if they still want one.”

Dan Spiegle: A Life In Comic Art documents the career and life of one of the most respected—and hardest working—comic artists of the last sixty years, with a career spanning the Golden Age of comics through the Modern era. From his beginnings on the Hopalong Cassidy newspaper strip, to his thirty-year tenure on Dell and Gold Key’s licensed TV and Movie adaptions (Lost in Space, Korak, Magnus Robot Fighter, Mighty Sampson, Buck Rogers), Dan’s work is admired by fans and professionals alike. During the 1980s, he worked at DC Comics on Batman, Unknown Soldier, Tomahawk, Jonah Hex, Teen Titans, and the fan-favorite reboot of Blackhawk (taking the character back to its World War II roots), as well as his popular Crossfire series for Eclipse Comics, Dark Horse’s Indiana Jones series, and more.

In this book, author John Coates documents Dan’s entire life in comics, through interviews filled with insight into the comic industry, colorful anecdotes of meeting celebrities, plus an examination of Dan’s artistic process from script to finished drawing, as well as personal reflections by Dan’s family on growing up with a father in comics. It includes dozens of images of Dan’s work, along with personal photos of family and industry peers, and numerous private commission drawings. Anyone who read comics between the mid-1950s through the 2000s probably enjoyed a comic with Dan’s art. Now they can learn about his life in comic art.

This book includes a color section, a Foreword by longtime collaborator Mark Evanier, and an Afterword by Sergio Aragonйs.

TwoMorrows is offering free digital preview at this link:

Since 1994, TwoMorrows Publishing has been bringing a new day to comics fans, through its award-winning line of magazines and books.