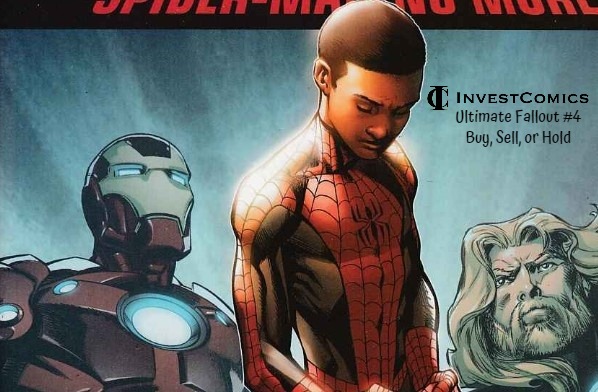 One comic is chosen to go under the scope. What is the best course? As a speculator, is it worth buying, selling, or holding?
Here are the pros and cons, and then YOU decide.

Over the past few years, Marvel and DC have embraced the modern world in the sense of recognizing diversity and gender. We are not here to debate or politicize whether it is right or wrong, just pointing out the comic industries’ obvious and often proven track record and said intentions. Female, African American, and gender have all played a pivotal role. Yesteryear male characters have changed to female leads, as African American, Latino, and Asian characters have taken on more of a lead role. And brand-new female characters have been introduced tenfold and have taken lead roles as well.

Pros: With the ever-changing landscape in modern times, Miles Morales is posed to become front and center as the lead Spider-Man character in the Marvel Universe. A recent PS5 video game trailer revealed that Miles will get his own title, prompting an all-out assault in the aftermarket for his first appearance. The video game title could be more of an indication of Marvel (Sony’s) desire to move forward with Miles at the forefront as opposed to Peter Parker. Prices have climbed to stratosphere numbers for sellers. The regular graded 9.8’s have exceeded the $1400 mark already. It is a seller’s market right now, but things can (probably) will settle a bit before the release of this article. Miles Morales is a relatable Spider-Man lead to many in today’s world, not that Peter Parker is not. A new Spider-Verse movie was announced a few weeks ago, and that did not even spark the massive aftermarket affect the PS5 trailer did. So, as the Spider-Verse 2 film draws closer, expect another surge for this first appearance. Rumors are hellish regarding Miles appearing in the new Venom movie as well. If this happens, expect a surge beyond comprehension for Ultimate Fallout #4. Beyond anything, a speculator could imagine. We are talking 4K and up, easily. More so on any variant and newsstand. The film industry will dictate where Ultimate Fallout #4 will settle in at. If the torch is passed from Peter to Miles on Film, the internet will break. This will be the modern-day Amazing Fantasy #15, but…….

Cons: This is not 1962’s Amazing Fantasy #15 (First Peter Parker/Spider-Man). By comparison, well, UF #4 is not deserving of one, but we will supply some numbers anyway for the sake of this section of the article. Ultimate Fallout #4 has over 1700 CGC graded books sitting at 9.8. This is not counting CBCS’s inventory. Over 1300 at 9.6. Again, no CBCS numbers included here. The total number of graded Ultimate Fallout #4’s as of right now is 5837. Safe and easy to assume one can tack on over a 100 (very low number most likely, but don’t want to over exceed either) in each of those grade categories sitting at CBCS. Amazing Fantasy #15 has a total of 23 CGC grades above a 9.0. Zero sit at a 9.8 (or above), four at 9.6, six at 9.4, three at 9.2, and ten at 9.0. And again, some could be sitting at the top of CBCS. It is safe to assume not too many since CGC has had such a huge head start. Amazing Fantasy #15 has a total of 3333 graded at CGC. So, with all of that squared away, if one wants to consider themselves a collector, try to keep the comparison of the two books to a minimum. Actually, don’t do it at all. The speculation exploded over a PS5 video game trailer. Not the normal speculative aftermarket increase one would expect, which should put up a little flag. Today’s modern speculator market awaits anything to pounce on to create the next “hot comic”. Just because someone thinks it is a hot comic, does not necessarily mean it is. Most always, a fling of the week/month often comes down to you not standing the way they eat or laugh. It is a temporary new flavor, and most will fall out of needing or wanting it so bad, thus prices come back down to planet earth, and you break up with her. The top-heavy graded market for Ultimate Fallout #4 will only increase over time and the desire to score a high-grade raw copy will (and currently is) an easy grab. See New Mutants #98. Top-heavy graded markets are not attractive to a true collector. Amazing Fantasy #15 will always be more desirable to a real collector for two reasons. One, the obvious, and two the higher grades are harder to get. Makes it elusive and that is the game. Trying to get that girl that is way out of your league. More challenging.

These are different times. Peter Parker/Spider-Man was revered by kids growing up reading comic books back when Amazing Fantasy #15 was released. This simply does not exist these days. Not even close. Ask yourself, do you know any child under the age of 10 reading comics these days? 15? If you do, it is extremely far and few between. The market today consists of these demographics, the older collector, the speculator, and the casual reader. Older collectors are getting old, causal readers just want to read their comic story and move along, and the modern speculators believe every comic is a key. This is not a healthy market to sustain higher prices 25 years from now. Hell, in some cases even a week from now. One must consider the economic climate right now as well. Yes, certain store owners all over the internet want to boast about the market booming with back issue sales and new sales, but the reality is, the money will run dry eventually for the speculator/spenders and the older collector will be getting older to the point they are physically/mentally not able to be in the market anymore. When does the new blood arrive? Are they busy playing video games right now? On their phones? Watching YouTube? Yes, that is where they are. An over-exaggerated/overpriced “hot comic” hurts things, doesn’t excel anything. Is this Ultimate Fallout #4?

Will Miles Morales be the next big thing or just a big thing to the small speculative community in years to come? Here is an easy test to gauge the market on reality and real-time regarding newer comic characters. Does the girlfriend, wife, cousin, uncle, aunt, grandfather, sister, or brother know immediately who Miles Morales is if you mention his name to them? Go ahead, ask them. Then ask who Peter Parker is. That is the “Ultimate Fallout” folks, once the name becomes household, then you own a comic probably worth holding onto for the long haul. Almost untouchable. This obviously does not equate to every expensive/key comic character, but it equates more to the current market and state. But how far are you willing to climb that mountain before you pull that trigger? Buy Ultimate Fallout #4 for $1000. Maybe $1500? $2100? What is your ceiling?

No one runs the table like InvestComics does. No one. InvestComics is the only place you will get straight-shooting. We are the G.O.A.T. for a reason. Man, it feels good to be back.