Warner Bros. Entertainment & DC Entertainment sent this news to InvestComics to share with fans. Superman is 75 and BIG things are planned. Read on….. 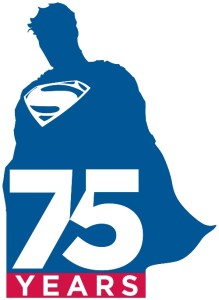 In celebration of the 75th anniversary of Superman, Warner Bros. Entertainment and DC Entertainment have revealed plans befitting one of the most popular and enduring Super Heroes of all time.

To honor Superman—the world’s first Super Hero—for reaching such an incredible milestone, the companies are kicking off a year of celebration including a new commemorative Superman 75th anniversary logo as well as an animated short tribute chronicling the rich 75-year history of the character, it was announced today by Kevin Tsujihara, Chief Executive Officer, Warner Bros. Entertainment.

First appearing in the comic book Action Comics #1, dated June 1938, Superman quickly became a cultural icon, winning fans around the world in live-action and animated form in nearly every known entertainment medium. In feature films, TV shows, radio, video games, publishing and merchandise, he has battled some of the greatest villains ever created in his endless pursuit of truth, justice and the American way.

Tsujihara stated, “Warner Bros. is privileged to be home to the global Superman brand, which has had an unparalleled impact on popular culture for 75 years. We are proud to commemorate this milestone with exciting entertainment across the entire Studio and across the globe, ensuring this enduring icon reaches new generations of audiences.”

The new animated short, currently in production, is being produced by Zack Snyder and pays homage to Superman and many iterations of the Super Hero throughout his 75 years. A sneak peek of this short is planned for Comic-Con International: San Diego in July and the finished version will debut late summer.

The new commemorative logo takes its cue from the iconic Superman costume, featuring predominantly blue coloring with a splash of red and highlights a bold silhouette of the Man of Steel with his cape waving behind him and the block-style lettering of “75 Years.” The mark will be rolled out by all the divisions on Superman-related promotions, products and initiatives. DC Entertainment will be the first to feature the new logo on the upcoming Superman Unchained comic book by artist Jim Lee and writer Scott Snyder, on sale Wednesday, June 12.

“Superman is undeniably the greatest Super Hero in the world and likely the most influential comic book character of all time,” according to Diane Nelson, President, DC Entertainment. “In addition to being an enduring presence in pop culture for the last 75 years, he continues to be a commanding global icon. DC Entertainment and all of Warner Bros. look forward to celebrating this important, year-long anniversary for Superman.”

In tandem with the various special celebrations comes the release of this summer’s tent pole action adventure feature “Man of Steel,” opening in theaters nationwide June 14.

Jeff Robinov, President, Warner Bros. Pictures Group, stated, “Superman is a larger-than-life figure, making the big screen the perfect place to experience his adventures, and ‘Man of Steel’ delivers with first rate story-telling that is broadly entertaining. It couldn’t be more fitting that the centerpiece of our summer slate hits theaters during this commemorative year.”

“It’s a great honor for all of us involved in ‘Man of Steel’ to carry on the tradition of Superman for longtime fans as well as a new generation of moviegoers,” director Zack Snyder said. “I’m so excited to share the movie with them and to be a part of this celebration.”

Superman enthusiasts can also look forward to much more, including:

To stay up-to-date on all things Superman and the celebration activities, please visit www.Superman75.com.