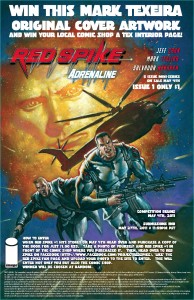 April 1, 2011 – Los Angeles, CA – You ever wanted to own an original piece of artwork by a legendary comic book artist but found it too expensive? Well, what if I told you that for just $1 you could be entered into a contest to win the original cover art for RED SPIKE #1 by the legendary Mark Texeira?

Well you can! NO JOKE!

All you have to do is pick up a copy of RED SPIKE #1 on May 4th for JUST $1, take a photo of yourself outside your local comic shop with the book and post it to the RED SPIKE Facebook fan page (http://www.facebook.com/ProjectRedSpike) and you’re entered!

But as if that wasn’t enough, the shop where our lucky winner purchased RED SPIKE #1 also wins an interior page by Tex himself!

So head out on May 4th and pick up your copy of RED SPIKE #1! Who knows, that lucky winner could be you!

Check out the rules below. 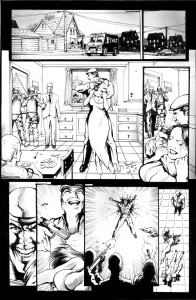 THE PRIZE
Winner will receive the original cover artwork to RED SPIKE #1 by legendary comic book artist Mark Texeira. The comic shop where the comic was purchased will also win an original interior page from RED SPIKE drawn by Mark Texeira.

HOW TO ENTER
When RED SPIKE #1 hits stores on May 4th head over and purchase a copy of the book for just $1.00 USD. Take a photo of yourself and RED SPIKE #1 in front of the comic shop where you purchased it. Then, head over to RED SPIKE on Facebook (http://www.facebook.com/ProjectRedSpike), ‘Like’ the RED SPIKE Fan Page and upload your photo to the site to enter. This will enter not only you but also the comic shop. Winner will be chosen at random.

WHO’S ELIGIBLE
The Sweepstakes is open to all residents of the United States and the District of Columbia who are 13 years of age or older at time of entry to be eligible for the Grand Prize. Void where prohibited by law. Employees of B & P Company, LLC, Benaroya Publishing, Benaroya Pictures, Image Comics, Inc. (collectively, “The Sponsor”) or any of their affiliates, subsidiaries, advertising or promotion agencies are not eligible, nor are members of these employees’ families (defined as parents, children, siblings, spouse, and life partners).

THE ODDS
The odds of winning are dependent on the number or submissions. One (1) submission per person. Multiple submissions will invalidate all entries by participant. Winner will be chosen at random.

THE LEGALITIES
The Sweepstakes is governed by the laws of the United States and the State of California, and participants in the Sweepstakes hereby consent to the exclusive jurisdiction and venue of California courts (state and federal) for any causes or controversies arising out of the Sweepstakes. Each participant waives any and all objectives to jurisdiction and venue in these courts. All applicable federal, state and local laws and regulations apply. Void where prohibited. Sweepstakes may only be entered in or from the United States and entries originating from any other jurisdiction are not eligible for entry.

Except where prohibited by law, the Winner grants to Sponsor and its advertising agencies the right to use and publish their photos, proper names, likeness, opinions, and city and state in any media to promote Sponsor and the Sweepstakes without additional compensation.

By entering, participants release and hold harmless Sponsor, its subsidiaries, affiliates, directors, officers, employees and agents from any and all liability for any injuries, loss or damage of any kind arising from or in connection with the Sweepstakes or receipt or use and/or misuse of any prize.

Sponsor reserves the right to cancel or modify the Sweepstakes if fraud or any other factor impairs the integrity of the Sweepstakes as determined by Sponsor in its sole discretion.

Sponsor assumes no responsibility for any error, omission, interruption, deletion, defect, delay in operation or transmission, communications line failure, theft or destruction of unauthorized access to, or alternation of, entries. Sponsor is not responsible for any problems or technical malfunction of any telephone network or lines, computer online systems, servers, or providers, computer equipment, software, failure of any e-mail or entry received by Sponsor on account of technical problems or traffic congestion on the Internet or at any web site, any combination thereof, or otherwise, including any injury or damage to entrant’s or any other person’s computer related to or resulting from participation or downloading any materials in the Sweepstakes.

ABOUT BENAROYA PUBLISHING
Founded in 2009 by Michael Benaroya, Benaroya Publishing is a company dedicated to the creation and cultivation of intellectual property by focusing on thrilling and compelling storytelling. Based in Los Angeles, California, Benaroya Publishing launches their debut titles this Spring under the Image Comics label. With David Elliott (FALL OUT TOY WORKS and co-founder of RADICAL PUBLISHING) at the helm as in-house Editor-in-Chief, Benaroya Publishing promises to bring fresh new ideas, and uniquely told stories to the comics literary world.

ABOUT IMAGE COMICS
Image Comics is a comic book and graphic novel publisher founded in 1992 by a collective of best-selling artists. Image has since gone on to become one of the largest comics publishers in the United States. Image currently has five partners: Robert Kirkman, Erik Larsen, Todd McFarlane, Marc Silvestri and Jim Valentino. It consists of four major houses: Todd McFarlane Productions, Top Cow Productions, Shadowline and Image Central. Image publishes comics and graphic novels in nearly every genre, sub-genre, and style imaginable. It offers science fiction, romance, horror, crime fiction, historical fiction, humor and more by the finest artists and writers working in the medium today. For more information, visitwww.imagecomics.com.