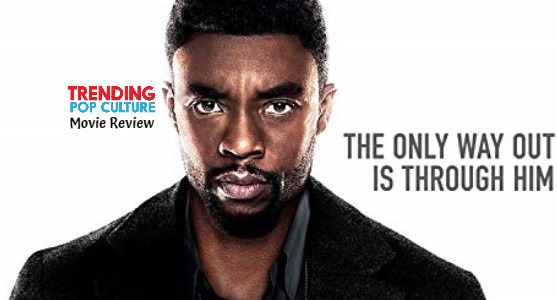 What is it about? An embattled NYPD detective is thrust into a citywide manhunt for a pair of cop killers after uncovering a massive and unexpected conspiracy.

Review: A very good action film, go see it. I can leave it at that and be done here. But this films deserves some words, so let’s jump in shall we?
From the onset, kudos has to go out to Cinematographer Paul Cameron for capturing the beauty of New York City and its surrounding areas. Being a life long resident there, he truly captivated the vibe and feel of the concrete jungle. The aerial views were stunning on the big screen and the ground 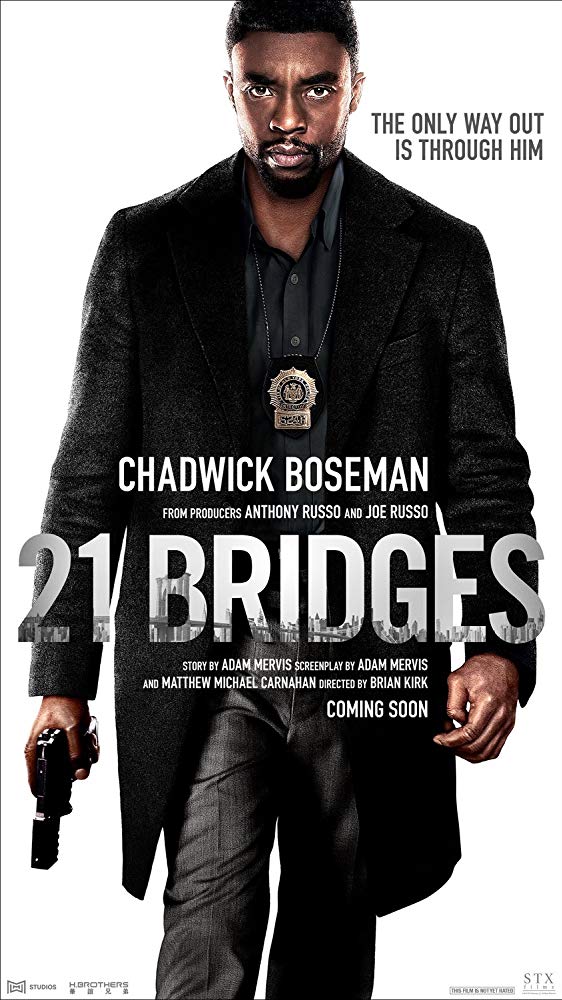 shots were equally impressive. So, paying huge respect to Paul Cameron for making this resident proud.
Actor Chadwick Boseman plays detective Andre Davis and delivers in an action/drama film in a way that will make you want more. Will there be more? Maybe this is the start of a new “Die Hard” franchise? Could be, should be.
Andre Davis’ character is quickly explained and understood. There is no mystery here. The understanding of Andre’s aggressive/passionate nature as one of the same goes dubiously noticed.
If you’re a movie goer seeking an action film with a plot, a predictable one at times, but a good balls to the wall crime drama, this is for you. No bs, straight forward movie. Everything is right in the front of you, so much so it may disturb viewers from the get-go. Super violent after the initial opening scenes, but necessary to set the pace and the character build.
Sienna Miller plays Frankie Burns, the typical partner one would expect in a cop film. Sienna Miller’s New York accent was very telling in the very first scene to the point of realizing how bad it was. Soon after, she either sharpened it up a bit, I became used to it, or she may have dropped it all together by the end of the movie. Not going to deduct points, but the New York accent isn’t exactly easy to listen to anyway for over an hour and a half straight if you’re not a native. This coming from a native New Yorker. Fuggetaboutit. So, forgotten and don’t care. She somewhat held her own, but was not that convincing as a narc. Maybe a bit overplayed in some scenes.
On the other hand, does actor J.K. Simmons (Captain McKenna) ever have a bad outing? The man knows his craft, well. What can be said here that hasn’t really been said about this actor. He delivers in every single film he appears in. He ropes audience members in with his screen time here in every scene. No, not an Oscar like performance, the film wasn’t made for Oscar moments. No offense to the writers or director, but this is a solid action/crime movie, not an academy award performance film. Captain McKenna is not a character that calls for J.K. Simmons to dig deep and perform on an Oscar like level, but who cares really? We’re here to see action and crime fighting that doesn’t involve superhero costumes.
Our main criminals in the film Stephan James (Michael) and Taylor Kitsch (Ray) are definitely cast well. Both bring what is needed to the film. Each of them make the audience develop an instant love/hate relationship with them. Actor Stephan James delivering more so and getting it perfectly right.
There are other co-players that do their part in filling in some gaps. Audiences will understand their roles quickly.
Fans of Chadwick Boseman will love this film. A fan of action cop movies will love this film. If the movie goer goes in with the understanding to expect a cop chase film and nothing else, you’ll thoroughly enjoy the hour 39.
Soundtrack: Expect an abundance of today’s R&B/rap music as well as big chase instrumental music from composers Alex Belcher and Henry Jackman.

TPC Rating: 3 1/2 Trending Arrows up (out of 5) from Trending Pop Culture.