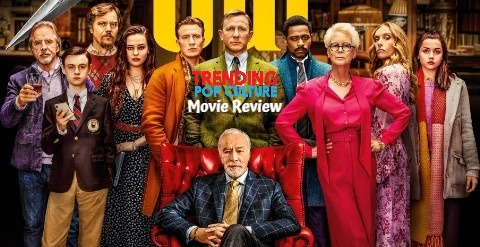 What is it about? When renowned crime novelist Harlan Thrombey (Christopher Plummer) is found dead at his estate just after his 85th birthday, the inquisitive and debonair Detective Benoit Blanc (Daniel Craig) is mysteriously enlisted to investigate. From Harlan’s dysfunctional family to his devoted staff, Blanc sifts through a web of red herrings and self-serving lies to uncover the truth behind Harlan’s untimely death. 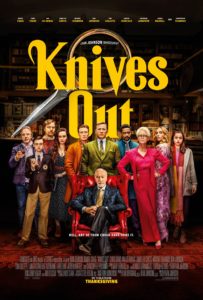 Review: Going in, this reviewer was expecting a film with lots of twist and turns with a dash of comedy, intriguing dialogue and unpredictability. Well, one out of four things isn’t that bad, right? This expectancy came from the viewing of the trailer.
If Inspector Jacques Clouseau was on this case, maybe he would have solved the case earlier instead of the two hour plus wait it took Daniel Craig. It’s the huge ensemble cast to blame here for the long film. Not saying it’s a bad thing, but there is much character development to get to. A lot. Mucho.
The development of character needs to move fast, so audience members get a rapid fire type questioning sit-down of each player from our main character, Detective Benoit Blanc, played by Daniel Craig. While entertaining, it seemed to last too long. It droned on a bit. The comedy aspect was there, but the dialogue was way too much. Comparable to a rap song or a song in general that is accompanied by too many lyrics. We get it, don’t over explain yourself. Get to the chorus. Being in favor of a dialogue heavy movie, i.e., Good Will Hunting, Dead Poets Society, The Usual Suspects, this movie was simply too much. It was the first time in my movie going history I wanted the film to end because of the constant words. I Already figured out the culprit of whodunit and became antsy because Detective Benoit Blanc was taking too long in figuring it out. That being said, there are plenty that do not mind so much dialogue in a whodunit movie. Of course there has to be lots of dialogue to figure out who murdered who, but when one figures it out before the main guy, it’s ants in the pants time. The comedy portion held this film together. If it weren’t for that being done well, I may have went out for a pack of cigarettes (and I don’t even smoke).
There are so many players in this film, to touch on each one would make this review as long as the dialogue I couldn’t sit through. I’ll try to make this brief and hit some standouts. Don Johnson plays Richard Drysdale. A superb job done by the Miami Vice cop. Delivery of comedic lines and overall acting was convincing. Richard’s son Ransom Drysdale played by Chris Evans was good. Not great, but good. Chris Evans is the modern day Rob Lowe. A good actor until he lands that Oscar roll, then viewers will get past his looks. Marta Cabrera, played by Ana de Armas is the lead actress. A compelling part that’ll make one feel her anguish and thought process throughout. An A+ here. Toni Collette plays the part of Joni Thrombey. Toni nails the greedy “lifestyle guru” daughter-in-law to perfection. Viewers will enjoy her screen time.
The average, keen movie goer will have most of this movie figured out by the half way point of your two hour+ stay. For this reviewer, it made for a longer feel because of the keen sense. No Crying Game, Usual Suspects, or even The Mist ending here. Maybe there are the viewers who will not figure out whodunit, be intrigued, but sitting through all of the chit-chatter is another thing altogether.
Soundtrack: As expected from a rich family setting, enthralling, loud violin classical music aplenty.

TPC Rating: 2 1/2 Trending Arrows up (out of 5) from Trending Pop Culture.