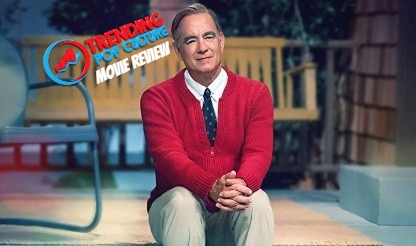 Welcome to the Trending Pop Culture movie reviews. A Beautiful Day In The Neighborhood, arriving in theaters November 22, 2019.

What is it about? Two-time Oscar-winner Tom Hanks portrays Mister Rogers in A Beautiful Day in the Neighborhood, a timely story of kindness triumphing over cynicism, based on the true story of a real-life friendship between Fred Rogers and journalist Lloyd Vogel. After a jaded magazine writer (Emmy winner Matthew Rhys) is assigned a profile of Fred Rogers, he overcomes his skepticism, learning about empathy, kindness, and decency from America’s most beloved neighbor.

Review: As very young child at the time this television show was airing, I was not a fan of it. We were an Electric Company/Sesame Street home. My mother would put the Mr. Rogers show on the small dial set we had and I’d grumble until it was changed to something more worthy of my time. However, this film was somewhat worthy of my time.
If anyone has the preconceived notion that they will see a “Mr. Rogers” biography film when they arrive to the theater, they’ll be a bit disappointed. This film, a 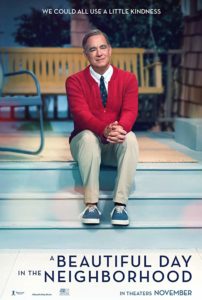 real life depiction, has everything to do with a journalist Lloyd Vogel (Matthew Rhys) and the friendship he forges with Mr. Fred Rogers. Lloyd is assigned the dubious task of interviewing the children show host “Mr. Rogers”. A natural pushback first occurs because he’s a “serious journalist”. The reluctance to do so really lends to the character’s build up.
A dark undertone story regarding the co-star journalist was a bit unexpected, but welcomed and also felt out of place at first. It soon weaved its way in its rightful place and within the very strange engaging Fred Rogers. Although the movie makes it clear from the outset, this will in fact not be a Fred Rogers bio-pic, it still misses the mark in explaining why Fred Rogers is so……..eccentric. Tom Hanks is a superb actor and at times makes the audience move in their seat a bit with the uncomfortable demeanor of his character. This reviewer wanted to know, why is Fred so melancholy? What was his childhood truly like? What was he like as a parent? Why does he read the gospel as he does, delivering the word of God unto anyone he touches. Yes, one does not need a reason to read the word of God, but it would be interesting to know why he carries it so close in many moments. Did he lose someone close? Was there a life changing moment? Maybe he just found the gospel to be a helpful tool for his wellbeing and wanted to deliver the message too. Who knows? We certainly don’t. Many of the aforementioned questions were answered in the movie, but were touched on and moved along. Maybe this reviewer wanted more Fred and less Lloyd? But some I spoke to afterwards thought the same way.
At one point the journalist inquires to Fred Rogers, “Do you ever get angry?” his reply was “yes”, with a very dark followup about a son of his. The audience wanted more, but this wasn’t about Mr. Rogers, right? The anger, in dealing with it, not where it really comes from, was explained in a way that truly avoided an answer.
As said before Tom Hanks is a brilliant actor, but the character he portrays was not dived into as much as this reviewer would have hoped for. More questions about the main character than the co-star. That’s not how it usually works, but actor Matthew Rhys delivers here on his part. He definitely made the relatable transition for the audience to care about his life, his resentment, anger, confusion, his wide spectrum of emotions. A stellar job here. His wife Andrea Vogel, played by Susan Kelechi Watson was a huge addition in adding the whole element within the life of Lloyd Vogel. Susan really brought a realism to the part and every male deserves a female counterpart like her character in their lives. Supportive, yet a strong will to set things straight if need be. Absolutely loved her. Lloyd’s father (Jerry Vogel), played by Chris Cooper was another fantastic supporting cast member. An intricate part in the storyline done so well. Joanne Rogers, wife of Fred, played by Maryann Plunkett became a bit of a head scratcher like the Fred Rogers character. She too, was a bit eccentric and always seemed as though she wanted to say something either profound or scream that’s she’s being kept against her will. Yes, it really felt this way, it was strange. Actress Maryann Plunkett delivered what was given to her and maybe that’s the way it was supposed to come across and this reviewer missed it, but this reviewer was a bit perplexed by her.
Overall a good movie with more questions to ask about the main character than there should be. If you’re looking for a wide explanation about the life of Fred Rogers, you’d be knocking on the wrong door.
Soundtrack: A bevy of folk and 70’s music. Plus lots of Mr. Fred Rogers originals.