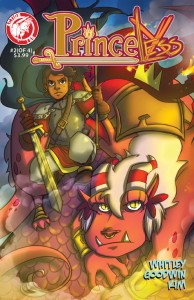 Now that
Princess Adrienne has escaped, it’s up to her to save her sisters. The
first on her list is the youngest sister, Appalonia. But saving
Appalonia means going back to her family’s castle and…even worse…facing
her father. Will Adrienne be able to break into her old home and if she
does, will she be able to get out again?
The story of the Princess who
saved herself continues in PRINCELESS #2, “ALL FOR THE WANT OF A PROPER
BELT”.

Written by JEREMY “THE ORDER OF DAGONET” WHITLEY with stunning
art by M. GOODWIN, and featuring a back up story by JEREMY and D.E.
BELTON, Princeless is a swashbuckling mini-series that will appeal to
children of all ages!

PRINCELESS: WHO NEEDS PRINCE CHARMING? SAVE
YOURSELF!

Additional information and release
schedule can be found at www.actionlabcomics.com