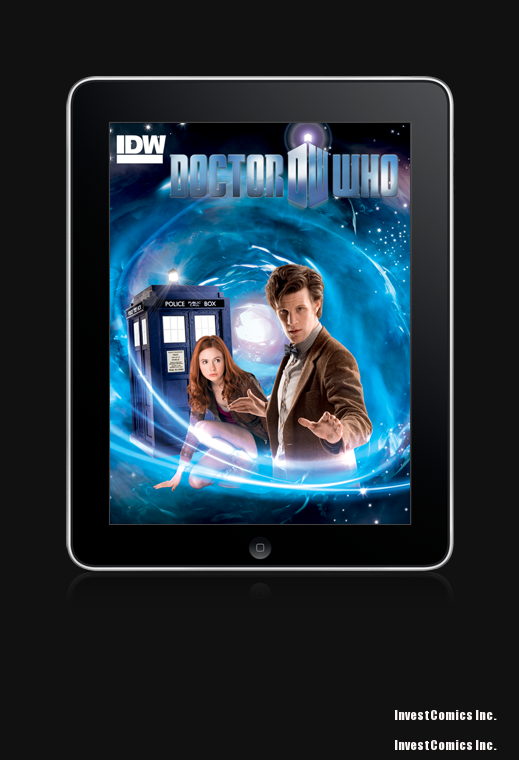 San Diego, CA (March 19, 2011) – IDW Publishing and BBC Worldwide America have today announced the global digital launch of IDW’s critically acclaimed DOCTOR WHO comic book series. Doctor Who fans worldwide can now follow the Doctor’s comic book adventures on their Apple iPads and iPhones, and Sony PSPs, along with IDW Publishing’s entire catalog of DOCTOR WHO comics, which is now out in digital form.

One of BBC Worldwide’s most successful franchises and the longest running science-fiction television series in the world, Doctor Who follows the adventures of the Doctor, the mysterious traveler who, with his human companions, journeys throughout all of time and space, facing a variety of foes and righting wrongs. IDW’s extensive catalog of DOCTOR WHO comics features both original stories and reprints of classic adventures. Currently, IDW’s DOCTOR WHO brings readers all-new adventures of the Eleventh Doctor that augment the on-screen excitement.

“We’re excited to bring out DOCTOR WHO comics on the PSP, as it’s a perfect comic for the game audience,” stated Jeff Webber, IDW’s director of ePublishing. “For Apple devices, while all of the issues are also available in our IDW Comics app for our regular readers, there are many ravenous DOCTOR WHO fans that may not be familiar with the comics. So we created a stand-alone DOCTOR WHO Comics app that lets us feature the Doctor at the top level of the app store, offering users worldwide a completely focused experience.”

Ed Casey, Director of Licensing, BBC Worldwide America, who brokered the deal, said: “DOCTOR WHO fans are loyal and passionate and I’m sure they’ll love the fact that they can now get their favorite Time Lord in this 21st century format.”

Prior to this digital launch, IDW’s DOCTOR WHO comics were only available in print in North America. Available to international readers for the first time, DOCTOR WHO digital series presently includes over forty issues, with more added each month. The full catalog is available for iPads and iPhones as a custom branded app, and as individual issues on the PSP.

Added Webber, “Plus, it’s just awesomely fun to build an app that keeps the look and feel of something that could be a part of the TARDIS itself. It’s just possible that the app might start pulling in comics from the future that haven’t even been created yet!”

Doctor Who returns to BBC AMERICA screens in the U.S. on Saturday, April 23.

Sony PSP:
http://playstationcomics.com
Visit IDWPublishing.com to learn more about the company and its top-selling books.
About IDW Publishing
IDW is an award-winning publisher of comic books, graphic novels and trade paperbacks, based in San Diego, California. Renowned for its diverse catalog of licensed and independent titles, IDW publishes some of the most successful and popular titles in the industry, including: Hasbro’s The Transformers and G.I. JOE, Paramount’s Star Trek; HBO’s True Blood; the BBC’s DOCTOR WHO; and comics and trade collections based on novels by worldwide bestselling author, James Patterson. IDW is also home to the Library of American Comics imprint, which publishes classic comic reprints; Yoe! Books, a partnership with Yoe! Studios; and is the print publisher for EA Comics and ComicMix.

IDW’s original horror series, 30 Days of Night, was launched as a major motion picture in October 2007 by Sony Pictures and was the #1 film in its first week of release. More information about the company can be found at IDWPublishing.com.
About BBC Worldwide
BBC Worldwide is the main commercial arm and a wholly-owned subsidiary of the British Broadcasting Corporation (BBC).  BBC Worldwide, America, with headquarters in New York and Los Angeles, brings together all of BBC Worldwide’s businesses in the U.S.  The company exists to maximize the value of the BBC’s assets for the benefit of the UK license payer, and invests in public service programming in return for rights. BBC Worldwide has six core businesses:  Channels, Sales and Distribution, Content and Production, Home Entertainment, Global Brands and Magazines.  Under these businesses fall two key brands in the U.S. – digital cable channel BBC America and a bi-coastal production arm responsible for the smash hit Dancing with the Stars for ABC.
Apple, the Apple logo, iPhone, iPod touch, and iTunes are trademarks of Apple Inc., registered in the U.S. and other countries. iPad is a trademark of Apple Inc. App Store is a service mark of Apple Inc. Content purchased from the iTunes Store is for personal lawful use only. Don’t steal music.