What is it about? Marcus and Mike have to confront new issues (career changes and midlife crises), as they join the newly created elite team AMMO of the Miami police department to take down the ruthless Armando Armas, the vicious leader of a Miami drug cartel.

Review: Wow, what a movie. So much fun. From the onset, this movie grabs the viewer and never lets go. I was a very happy hostage for the 123 minutes of my life. Directors Adil El Arbi  and Bilall Fallah  do a superb with this film. Cinematographer Robrecht Heyvaert drives and dives us through Miami at breakneck speeds. Not so fast that you miss any action, just fast enough to get a whiff of the roses and then it’s time to move along. There aren’t many, if any, dull moments. 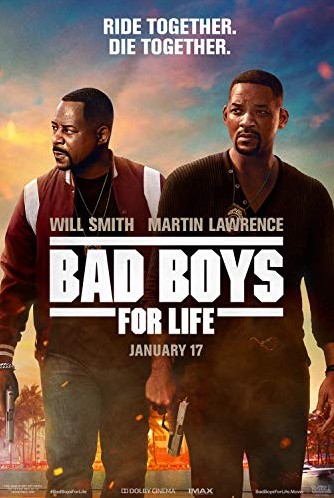 The lead actors Will Smith (Detective Mike Lowrey) and Martin Lawrence (Detective Marcus Burnett) reprise their roles once again in this roller coaster, drama filled, action packed film. Joe Pantoliano returns as Captain Howard. Any fan of the first two films will tell you that Captain Howard rounds out the entire Bad Boys theme. Without “Cap”, the Bad Boys team would definitely be missing his vibe. Joe Pantoliano hits every single scene with exactly what is expected of him. Pure joy watching veteran actor, Mr. Pantoliano do his thing. Speaking of doing their thing, Will and Martin hit their marks with more than what was expected from this reviewer. Not expecting a disaster or anything less stellar from these two actors, but the trailer(s) do not do them justice for what they truly put out. Detective Mike Lowrey (Will Smith) is as suave as he was in the first two films. Setting up Detective Marcus Burnett (Martin Lawrence) for the show stealing scenes in this movie. This is, in this reviewers humble opinion, the best performance put forth by Martin Lawrence. Will Smith outshines himself as well, but Martin made the audience literally laugh over the films dialogue on two separate occasion, thus missing extra lines. But man was it worth the laugh. Martin is absolutely hilarious.
The “young bucks” arrive to assist the “old men”. They are a new tactical team put forth by the Miami police department. They are called; AMMO. Not even sure what the initials stand for at this moment, but it’s not important. The AMMO team lend to the hilarity of the Will, Martin and Joe team. The entire AMMO team were a huge, intricate part of this movie and showed off their acting chops. Vanessa Hudgens (Kelly) was as tough as they come. Flexing action fighting/gun fighting skills. Alexander Ludwig (Dorn) and Charles Melton (Rafe) are on WELL on their way to becoming HUGE stars. Watch as they will break out into household names in a short time. Our villain, Armando Armas, played by Jacob Scipio, plays his part affectively. Not the strongest villain of the Bad Boys trilogy, but affective enough to the point you will build a disdain for the character. Watch this young actor to break out as well in a big way. That’s three young actors here that will eventually star in their own blockbuster in a few years. Mark these words.
The story moves along at a rapid pace with a few twist and turns along the way. Two unexpected moments lead the audience into gasps and murmuring, which were welcomed because the film was hitting its stride so well.
Overall, this movie is definite MUST SEE. It could have easily been a summer blockbuster. If there was one thing to chose, regarding a negative point, it had to be the first extra credit scene. Very silly and didn’t make much sense in the grand scheme (the entire scope) of things that led up to that point. Are we all supposed to forget?? Nonsense. It really could have seen the cutting room floor because it’s flat out silly. The second extra scene was another laugh out loud moment.
Soundtrack: If you’re a fan of today’s hip hop music, you’ll be joyous. If you’re not, you’ll tolerate it because the film is that good.

See you at the movies,
Jay Katz