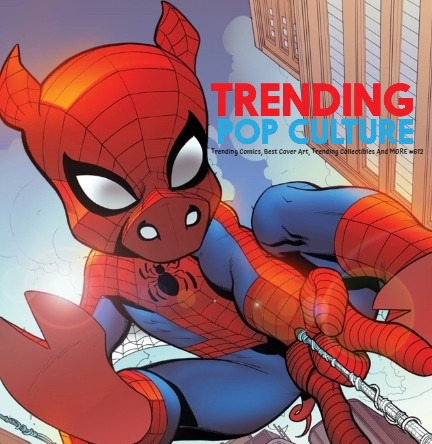 InvestComics/Trending Pop Culture; SINCE 2005.
Here are this week’s top Trending Comics, Cover Art, Trending Collectibles and MORE headed your way this Wednesday 1-29-20
Click on the RED links, Images or the comic cover to buy/bid from All available sellers on Ebay
Please note: New comic book releases and all items are subject to change

Thor #2 – It’s safe to say, writer Donny Cates is not looking for DC Comics work anytime soon. It’s very evident in this comic. He annihilates the entire DC Universe within the pages of this comic. In a Marvel comic. For about 3 pages, he details the utter destruction of “The Gods” of a particular world/universe, including a Bat God. It’s not the first time the big two have gone this route and it won’t certainly be the last. Artist Nic Klein carefully crafts the imagery so that lawsuits don’t start flying.
Justice League #39 – Writer Scott Snyder will end his run. His last will tie everything together since he started on the premiere issue. Artist Jorge Jimenez helps to close things out.
Avengers Of The Wastelands #1 – Just when you thought Marvel was finished with the Old Man Logan character, he’s back. Well, not really. This comic is a spinoff from that series, but expect Old Man Logan to somehow make an appearance eventually. Writer Ed Brisson and artist Jonas Scharf.
Ravencroft #1 – Ravencroft is officially a hit. Writer Frank Tieri is kicking ass and taking our money. Look for this comic to sell out as have the previous three Ravencroft stories Mr. Tieri has written. Art from Angel Unzueta.
Teenage Mutant Ninja Turtles #102 – A possible big trender here if some new characters are introduced. Keep an eye out on this one. Creative team; Kevin Eastman, Tom Waltz and Sophie Campbell.

Avengers #30 – The new wielder of the Starbrand is revealed! Writer Jason Aaron and artist Ed McGuinness.
Cat Shit One #1 – From Antarctic Press; creator Motofumi Kobayashi brings this story back to life for the first time in comic book format.
Lady Zorro #1 – A new Zorro for the new age. A Lady Zorro?! Yep. From American Mythology, creators Patrick Shand and Mike Wolfer.
Quantum & Woody Vol 5 #1 – Every time Valiant Entertainment releases a new volume of this duo, it sells out. It also creators new buzz about either a television show, a film or an animation series. You’ll see the news pop up again, wait for it. Written by Christopher Hastings and penciled by Ryan Browne.
The Amazing Spider-Man Daily Bugle #1 – A Marvel comic dealing with the inner workings of Peter Parker’s work place. The Office meets Marvel. Nah, just kidding. Wishful thinking, but this will be an interesting series nonetheless. Writer Mat Johnson and artist Mack Chater.

Marvel had an idea (The House of Ideas!) back in 2002 to release a comic story revealing of the demise, last stand of their character; Hulk. They simple called it Incredible Hulk: The End. It ws a one shot and fans loved it. Writer Peter David and artist Dale Keown added to the excitement of this comic. It was very well done and Marvel since then have released several “THE END” comics throughout the years. This week, fans will witness the demise (or maybe not) of four Marvel characters. Comic fans love a death story!
Captain America The End #1 – Writer/artist Erik Larsen.
Deadpool The End #1 – Writer Joe Kelly and artist Mike Hawthorne.
Doctor Strange The End #1 – Writer Leah Williams and artist Filipe Andrade.
Captain Marvel The End #1 – Writer Kelly Thompson and artist Carmen Nunez Camero.

Billie Eilish – everything i wanted