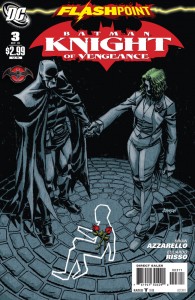 Last week during San Diego Comic-Con, there was a lot of buzz on the convention floor about the DC Comics books. Fans and press alike were raving about FLASHPOINT and its tie-in titles, particularly FLASHPOINT: BATMAN – THE KNIGHT OF VENGEANCE.

In issue #2, the spectacular reveal of The Joker’s identity was made. Below, take a look at a killer twist of an iconic moment in comic book history from BATMAN: THE KNIGHT OF VENGEANCE #3. The issue, which goes on sale next week, is the truly startling conclusion to Brian Azzarello and Eduardo Risso’s mini-series. It’s an instant classic, by two bestselling creators working at the top of their game. 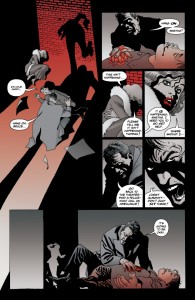