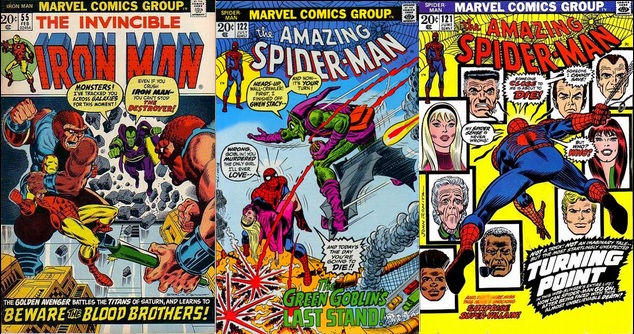 Lets take a look at a list I have compiled of potentially the best selling ongoing Marvel Comics series of 1973.

This list ranks them in order of best selling titles based on total number of sales.   Most of the sales statistics come from the yearly average published in each title.  Sales annual data information originally collected by John Jackson Miller in his book “Comics Buyers Guide: Standard Catalog Of Comic Books”.  For some titles marked with a * I have come up with a potential number of what the sales might have been for numerous titles basing the numbers on years around it when the 1973 info was not known.

Amazing Spider-man was a true success story for Marvel and was once again the #1 best selling title for the publisher for almost a decade in a row at this point.   This year everyone waited in anticipation in shock when 2 issues in a row featured major deaths which was unheard of in comics at this time.  The deaths of Gwen Stacy and Green Goblin have long been two of the most important 1970’s comic books.  Spider-man sales were so strong that Marvel Team Up also ranked as one of Marvel’s best selling titles and may have come in #3 of the year. These estimates are based on later sales figures from the late 70’s but its likely they were at least this high if not higher in the early 70’s.   Marvel Tales reprinted issues and also came in a strong #15.

Fantastic Four came in a strong #2 and these were the same top 2 comics for the company every year for the last 10 in a row.

However Marvel comics sales were definitely slipping in the early 1970’s.  In the last 4 years alone both Spiderman and Fantastic Four both lost 100,000 readers !!   This was the worst year of sales for both titles since about 1964 when readership was newer and on the rise.

Conan was a true success story for Marvel in the 1970’s.  This was the newest title to have huge numbers and the estimate used here is from a later 1970’s sales date so its possible sales may have been higher and if so, Conan may have possibly been the #2 selling Marvel title just behind Spider-man !

Thor was still ranking high at #5 in 1973 but its sales were the lowest it had been since the character debuted in 1962.  This was the first year since 1962 that sales dropped below 200,000 copies per month.

Iron Man we have ranked at #6 but this might be way off. Unfortunately no Iron Man sales figures have ever been published prior to 1980 and so that is the number we are using for comparison.   So Iron Man may have potentially sold a lot more or a lot less in 1973.  Thanos debuted in Iron Man #55 and is now the most valuable comic published in 1973.

In a year of sales lows, Incredible Hulk, for the first time also fell below 200,000 copies a month.   Even Tales To Astonish had always sold over 200,000 copies during the Hulk’s entire mid 60’s run.

The Avengers, Captain America, Daredevil all sold decently but like always were considered 2nd tier heroes for Marvel.

It’s even possible that the new Crazy Magazine featuring satire and jokes was outselling X-Men at this time.   Here we use later 1970’s sales figures for Crazy but it likely sold higher as it debuted in 1973.

Out of the 62 ongoing series on our chart, Marvel only published actual sales figures for 10 of them.  The 1970’s had very few sales figures posted so all the remaining titles at the bottom of this chart NEVER had any sales figures so I am not going to speculate on any guesses of actual numbers.     Two possible guesses: Newer titles would have had higher readership as more people were starting to pick up new series.   Superhero titles may have outsold other genres such as horror, western and romance even though those were quite popular at this time still and dominate much of the list.    The comics at the bottom of the list are not listed in any particular order.

The biggest key valuable books so far from 1973 include Iron Man #55 with 1st appearance of Thanos and the mega-famous storyline of Amazing Spider-man featuring the deaths of Gwen Stacy and Green Goblin.

Looking for any comics on this list!  Contact us as we can order any comics for you on this list at www.HoknesComics.com
Terry Hoknes (author) of Hoknes Comics loves analyzing statistics and watching the growth and fall of comic titles over a period of time.  He sells all of the latest hot back issue secondary market new comics and all new Diamond products at www.HoknesComics.com and also self-publishes a series of books called “Investing In Comic Books” that focus on the Golden, Silver and Bronze ages of comics. hoknes@hotmail.com