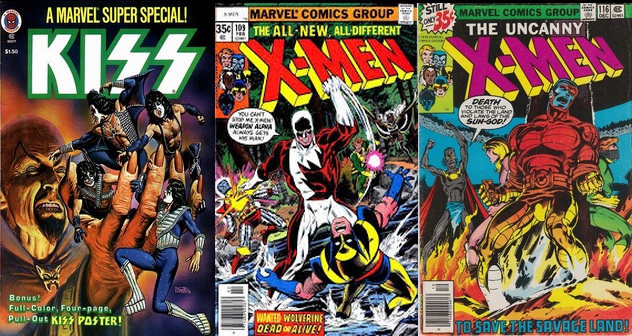 Lets take a look at a list I have compiled of potentially the best selling ongoing Marvel Comics series of 1978.

This list ranks them in order of best selling titles based on total number of sales.   Most of the sales statistics come from the yearly average published in each title.  Sales annual data information originally collected by John Jackson Miller in his book “Comics Buyers Guide: Standard Catalog Of Comic Books”.  For some titles marked with a * I have come up with a potential number of what the sales might have been for numerous titles basing the numbers on years around it when the 1978 info was not known.

Star Wars was in its first full year of publication after the debut of the hit movie the year before which totally changed the movie industry, comic industry and toy industry.   Star Wars sales for 1978 are estimated and may potentially have been much higher.

The new Spider-man live action TV series may have failed but Spider-man sales were at a high fever with Spider-man appearing in the #2, #3, #4 and #13 best selling Marvel comics of the year.

Conan The Barbarian with estimated sales may have ranked a very impressive #5 of the year.

The Thing was a true celebrity with sales of his own title Marvel Two In One potentially tie-ing in sales with Fantastic Four.

The team up and reprint related Marvel title series were definitely popular in the late 1970’s with numerous titles in the top 20.

The last of the Marvel bronze age horror comics were being made at this time but no sales figures exist except for Ghost Rider which ranked a decent #14.

Two of the weaker long running Marvel titles in the late 1970’s were Daredevil and X-Men before they were resurrected and became hot titles again in the early 1980’s.

Sgt. Fury was hanging on in sales selling almost as much as X-Men as Marvel’s last war genre title.

Spider-woman was the hottest  new debut marvel title of the year.  Sales figures are not known so its possible it may actually rank a lot higher than listed here.

The western genre was on its last legs with Rawhide Kid now selling under 100,000 copies which was a poor seller in this era.

There are 27 more ongoing series listed down below but no sales figures have ever been reported on these titles in any given year so its hard to estimate where the sales might be except to make a few stereotypical presumptions that the superhero original series would have sold the best and that the newer the series was the more people were likely picking up early issues.  There were numerous Hanna-Barbara comics aimed at young readers which possibly had smaller sales as copies have proven to be scarcer years later for collectors.   Numerous Marvel magazines and treasuries were also being made at this time so its hard to estimate a sales figure.

I have debated many times with collectors about the potential future value of late bronze age books.  Many don’t believe the era has a chance of huge price increases but I see more and more signs of nostalgia kicking in as these books finally reach of age as true collectibles and key issues (even though common) are bringing record prices.     If the number of collectors that reminisce correspond with the popularity of the books in the first place than this chart could actually help show which titles have the best long term potential based on interest.

The late 1970’s made a significant increase in speculators and superhero collectors who would buy multiples of #1 issues and collectors were starting to bag and board their comics.  On average Marvel Comics in 1978 sold 300% higher / more copies than a Marvel Comic does today in 2013.

The biggest key valuable books so far are Marvel Comics Super Special #5 – the 2nd magazine to feature the rock band Kiss and is now highly collected.   X-Men began its new era in 1975 and sales were actually still fairly low in the late 1970’s as the title gained a new following making those issues scarcer than most and in very high demand which makes late 1970’s X-Men the most collected title of the late bronze age.

Looking for any comics on this list!  Contact us as we can order any comics for you on this list at www.HoknesComics.com
Terry Hoknes (author) of Hoknes Comics loves analyzing statistics and watching the growth and fall of comic titles over a period of time.  He sells all of the latest hot back issue secondary market new comics and all new Diamond products at www.HoknesComics.com and also self-publishes a series of books called “Investing In Comic Books” that focus on the Golden, Silver and Bronze ages of comics. hoknes@hotmail.com