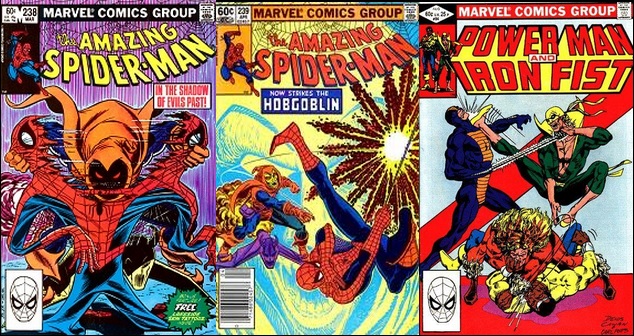 Copper Comics are becoming hotter than ever as these books approach the 30 year mark.

Lets take a look at a list I have compiled of potentially the best selling ongoing Marvel Comics series of 1983.

This list ranks them in order of best selling titles based on total number of sales.   Most of the sales statistics come from the yearly average published in each title.   For some titles marked with a * I have come up with a potential number of what the sales might have been for numerous titles basing the numbers on years around it when the 1983 info was not known.

X-men were officially Marvel’s new champions.  For a 2nd year in a row Uncanny X-Men was Marvel’ s best selling title and also a 2nd year in a row that sales surpassed 300,000 copies of every issue.  In fact X-Men celebrating its 20th anniversary had its biggest sales ever in the history of the title.  X-Men was the undisputed leader in Marvel sales and held #1 rank of the year for 17 years in a row (1982-1998).

Daredevil was at the peak of its career as well.  1983 was the best selling year of Daredevil for any year from 1969-2013.  Only 1960’s sales were actually higher.  Not even the 90’s glut period did sales figures reach this high as Daredevil outsold Spider-man and all other titles.

The Marvel Universe was super strong in the mid 1980’s and many of the core titles were having big comebacks.  Fantastic Four was having some of its best selling years (1983-1986) with 4 years in a row selling over a quarter of a million copies.

Amazing Spider-man had dominated as Marvel’s #1 best selling title for a full decade (1966-1976,1980).  However in the early 80’s Amazing Spider-man hit the lowest of its career ever since it had debuted in 1963.  It would not drop this low again until 1995 when the boom market finally crashed on all new comics.   Hobgoblin debuted in this series and would eventually became a collectors item key for 1983.

Alpha Flight is the highest ranking comic of 1983 that there are no sales figures known so its actually possible that sales figures were much higher and that it might have actually ranked as high as  #2 behind X-Men.    Known figures for 1986 were 239,000 which is the number I am using for comparison sake but being a new series may have sold much much higher in its first year.

The Avengers had a new boom in popularity during the 1980’s just like X-Men did.   I guess “groups” were in !  The Avengers had an impressive run of selling more than 200,000 every year from 1979 to 1990.   Interestingly during the big comics sales boom of the early 90’s Avengers sales actually were dropping not increasing like most titles.

New Mutants was another new title that there are no known sales figures so I have matched the number of 216,000 from the 1986 sales figures but just like Alpha Flight, sales may have been much higher in its first year.

Unfortunately there are no sales figures for Conan The Barbarian ever during the 1970’s but during the 1980’s the title surpassed 200,000 three times and this was one of those record years ranking a high #8.

Red Sonja was a new title in 1983 so I estimated sales could have easily been at least 30,000 copies higher than the following year so the title may have sold close to the 200,000 range in its first year only before dropping and surprisingly having a short life.

After the cancellation of the Incredible Hulk TV series the comic book lulled along during the entire 1980’s.   It did not have any real impressive years just sold decently throughout the decade.

Iron Man also was decent but not overly impressive during the decade.

Star Wars which had ranked as the #1 best selling  Marvel Comic in the late 1970’s was starting to show signs of wear after the 3rd movie appeared (Return Of The Jedi).  For the first time since its debut Star Wars fell out of the top 10 best sellers.

I have debated many times with collectors about the potential future value of copper age books.  Many don’t believe the era has a chance but I see more and more signs of nostalgia kicking in as these books finally reach of age as true collectibles and key issues (even though common) are bringing record prices.     If the number of collectors that reminisce correspond with the popularity of the books in the first place than this chart could actually help show which titles have the best long term potential based on interest.

While comics did not hit record high sales in the 1980’s they did become the first decade where the majority of collectors for the first time were trained to bag and board their comics.  On average Marvel Comics in 1983 sold 300% higher / more copies than a Marvel Comic does today in 2013.

The biggest key valuable books so far are Amazing Spider-man #238 and #239 and Power Man #84.   Power Man features an early appearance of Sabretooth and based on its low ranking is definitely one of the lowest printed Marvel key books of the year.