Award winning Dutch artist, Minck Oosterveer, (Ronson Inc., Jack Pott, Nicky Saxx) is best known in America for his work with Mark Waid on Unknown for BOOM! Studios. His successful and still growing career was cut short Saturday (9/17) when he was killed in a tragic motorcycle accident.

To honor the man and his talent, BOOM! has decided to share his work, with free digital copies of UNKNOWN.  In an email from BOOM!, Chip Mosher said, “This Monday we were stunned by the news of the the tragic passing of Minck Oosterveer. After the shock had worn off, we here at BOOM! Studios thought that the best way we could think of to celebrate his life is by exposing as many people as possible to his creative work.

So in honor of the memory of Minck Oosterveer, BOOM! Studios is offering all issues of Mark Waid and Oosterveer’s THE UNKNOWN and THE UNKNOWN: DEVIL MADE FLESH for free through all our digital partners — comiXology, iVerse, Graphicly, and mydigitalcomics. Please feel free to spread the word. Long known overseas, Minck was just getting traction here in the States, making his untimely passing even more tragic.”

I was devastated on Monday when I heard the sad news that legendary dutch comic book artist Minck Oosterveer died in a motorcycle accident. Even though we were a world away, and only communicated through e-mail, I considered Minck a friend and counted him as one of my favorite professional relationships. He was quite simply a class act. I had the opportunity to work with Minck on a few projects at BOOM! and the experience was a highlight. Out of all the creators I’ve worked with, spanning so many different projects, Minck always held a special place in my memory as one of my all-time favorites.

It’s natural to take pride in the creators that stand out on your series, those who make a stamp on the industry and generate fan excitement. Of course, Minck Oosterveer had an extensive and successful career long before I ever worked with him. But I took great pride in hiring Minck on his first American series and helping him break into a new market. It was something that he and I were both excited about and, inevitably, when people began to take notice of his work in the states, it was such a great feeling. The response to his work on THE UNKNOWN was everything that we hoped it would be.

To watch Minck Oosterveer and Mark Wark collaborate on THE UNKNOWN was to watch two masters at the top of their game. Their confidence, craft, and friendship was something to behold. I’ll always look back on that series, and the collaboration, with fond memories. I know Mark and I both walked away from that experience hoping that we’d work with Minck for a long time to come.

Minck was incredibly kind and thoughtful, funny and smart, passionate and genuine. As an artist, you literally couldn’t ask for anybody more professional and talented. His art was–is–transcendent. He would turn in beautiful comic book pages, every day, that were damn near perfect. Every morning I would look forward to opening my e-mail and seeing a new page from Minck. His work ethic and consistent level of quality was uncanny. There was a never a deadline he couldn’t meet. The man was truly a rare talent.

From all of us here at BOOM! Studios, we offer our deepest condolences to Minck’s family and friends. It’s with a heavy heart that we say goodbye to a phenomenal individual who had no peer. His legacy will live on through his beautiful work and all of the people whose lives he touched.

I will remember Minck Oosterveer as the gold standard for a comic book artist. A truly great man. An eternal master.

Rest in peace, my friend. 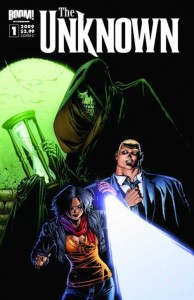