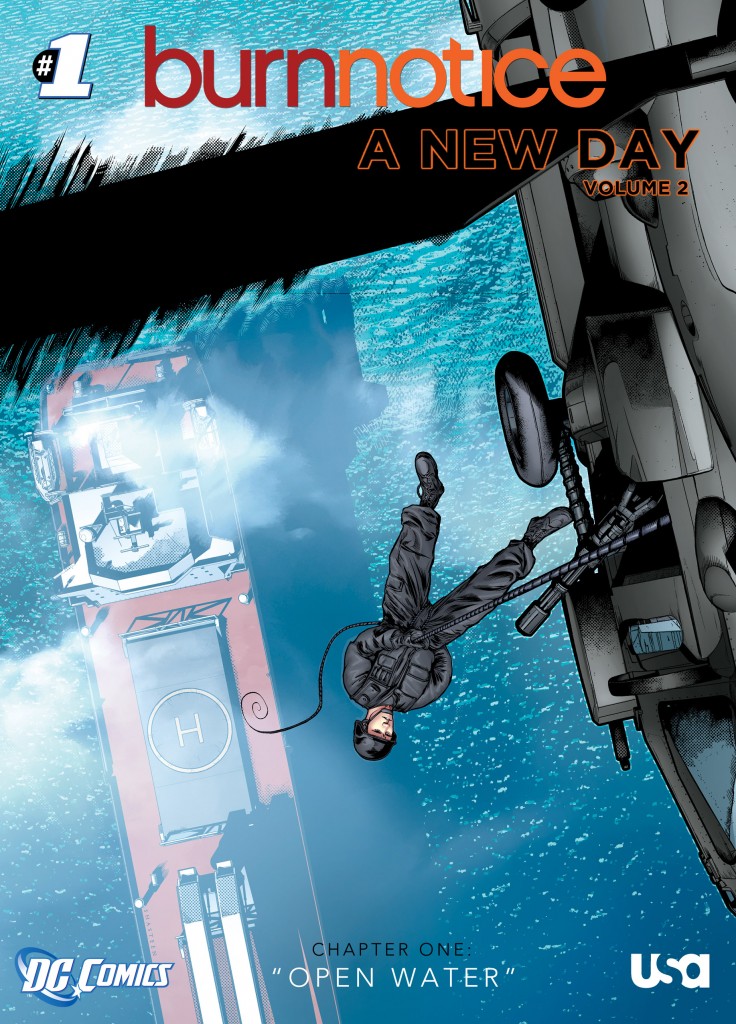 NEW YORK – September 22, 2011 – USA Network, in tandem with DC Entertainment, announces Volume Two of BURN NOTICE: A New Day, its engaging first interactive multiplatform comic book series. Sponsored by Hyundai, the comic book premieres on Thursday, September 22, giving fans their BURN NOTICE fix before the show’s return on November 3 at 10/9c. With more than 1.7 million page views, 160,000 fans have read and engaged with the comic book online and on their mobile devices.  BURN NOTICE: A New Day Volume Two is available on usanetwork.com, Facebook and as a freestanding iOS and Android App on select devices.

Written by the creative team behind the show, including series creator Matt Nix, this second volume features more exclusive content along with unique special effects that will give readers a 3-D view into selected panels, allowing them to more deeply explore Michael Westen’s environment.  Fans will have behind-the-scenes video of DC artist Tony Shasteen, who is returning as lead artist on the volume 2.  This content will not only show how he created the artwork, but how he determined the look and feel of the characters.  This new volume will feature exclusive cover art each week leading into all-new episodes of season five, which premieres Thursday, November 3, with a new issue unveiled that same day.

“The first volume of BURN NOTICE: A New Day was one of the most successful digital comics we’ve created to-date and a great example of how a comic can extend and deepen a show’s storyline, offering greater interaction with characters,” stated Hank Kanalz, senior vice president of digital, DC Entertainment. “Volume two takes that interaction to the next level with new features and exciting storylines – I can’t wait for fans to see what we have in store for them.”

BURN NOTICE: A New Day Volume Two, picks up with Michael Westen on board a military helicopter, suited up with a team of commandos, ready to storm a cargo freighter in the middle of the Pacific Ocean.  Once the siege of the freighter is complete, Michael is tasked by the CIA to continue rounding up members of the Organization that burned him.  Fans can follow him over 12 weeks to see his next moves and how he continues to clear his name.  Additionally, they can play interactive games, peelback the artwork to see the layers of drawing, see exclusive content, watch interviews with the writers and artists, and more.

“Building on the strong framework we developed in the first volume of the BURN NOTICE comic book, we are offering an unparalleled immersive feel that pulls our viewers right into Michael’s world of spies, espionage, and explosions,” said Jesse Redniss, vice president of digital, USA. “Our transmedia collaboration with DC, Hyundai, and our technology partners is resulting in a rich multiplatform experience that extends USA’s engagement with compelling storytelling on-air, online or on mobile devices.”

In addition to working with DC Entertainment, USA teamed with Panelfly, who built the mobile applications and cinematic effects, and Glow Interactive, who developed the online and Facebook versions, as well as the mobile interactive overlays.