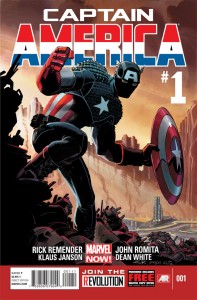 New York. NY—August 10, 2012— This November, the Sentinel of Liberty begins a new war against one of his deadliest enemies in a world unlike any other in Captain America #1, kicking off the all-new ongoing series from the blockbuster creative team of writer Rick Remender and artist John Romita Jr.! As part of Marvel NOW!, Captain America joins a number of titles that will take the Marvel Universe in an exciting all-new direction, as the industry’s top creators join the top Super Heroes to deliver all-new ongoing series, great for new and lapsed readers alike!

Thrust into a bizarre, inhospitable world far from home, the all-new, high-adventure, mind-melting, tough-as-nails era of Captain America is NOW! With no country and no allies, what’s left for Steve Rogers to protect? The Saga of Dimension Z begins here!

“Indiana Jones high adventure meets Lee & Kirby-flavored science fiction, as Captain America embarks on the adventure of two lifetimes,” said Axel Alonso, Editor In Chief, Marvel Entertainment. “To survive a gauntlet of challenges so outlandish that only Rick and John could have concocted them, Cap will have to re-examine who he is and what he stands for, and confront an unexamined period in the life of a young man named Steve Rogers.”

Marvel NOW! is the culmination of Marvel ReEvolution, the groundbreaking new initiative to evolve the comic book experience through innovation. With Captain America, Marvel NOW! ensures fans will discover an entirely new perspective in the adventures of Steve Rogers.

“This won’t be Cap getting orders and going off to serve S.H.I.E.L.D., this is going to be Steve dealing with threats he sees and at first he’s a bit reactionary,” explained Remender in an interview with Marvel.com. “He’ll be dealing with the day-to-day and doing his normal thing and when our story opens the inciting incident will change his life so dramatically that in ten issues he’ll be an entirely different person.”

Each issue of Captain America includes a code for a free digital copy on the Marvel Comics app for iOS and Android devices. Additionally, each issue of Captain America features special augmented reality content available exclusive through the Marvel AR app – including cover recaps, behind the scenes features and more that add value to your reading experience at no additional cost.

This November, Rick Remender and John Romita Jr. redefine what it means to be a hero in Captain America #1!

ON SALE THIS NOVEMBER!