Poyo takes a bite out of Comic Con! Check out the Variant cover to Chew #12.

POYO TAKES A BITE OUT OF COMIC-CON
Image Comics announces Comic-Con variant cover for CHEW #12
Berkeley, CA – 8 July 2010 – Whether he’s just the meanest rooster in town or the Devil himself, Poyo deserves all the adoration he gets, including his first convention exclusive cover on CHEW #12 at Comic-Con International 2010!
Limited to 350 copies, you can show your love for Poyo and CHEW by picking up your copy from writer John Layman and artist Rob Guillory at Image Comics booth #2729. Layman and Guillory will also have a very limited number of copies of CHEW: THE OMNIVORE EDITION, which won’t be in stores until August 11, 2010.
In CHEW, Tony Chu is a detective with a secret. A weird secret. Tony Chu is cibopathic, which means he gets psychic impressions from whatever he eats. It also means he’s a hell of a detective-as long as he doesn’t mind nibbling on the corpse of a murder victim to figure out whodunit and why. He’s been brought on by the Special Crimes Division of the FDA, the most powerful law enforcement agency on the planet, to investigate their strangest, sickest and most bizarre cases.
This gorgeous oversized OMNIVORE EDITION, loaded with extras, follows Tony for the first ten issues of IGN.com‘s pick for “Best Indie Series of 2009,” and MTV Splash Page’s “Best New Series of 2009.” Collects the New York Times best sellers “Taster’s Choice” and “International Flavor.”
CHEW #12: POYO Variant, a 32-page full-color comic featuring a five-color cover of Poyo, will be available at Comic-Con International for $10 at Image Comics booth #2729. 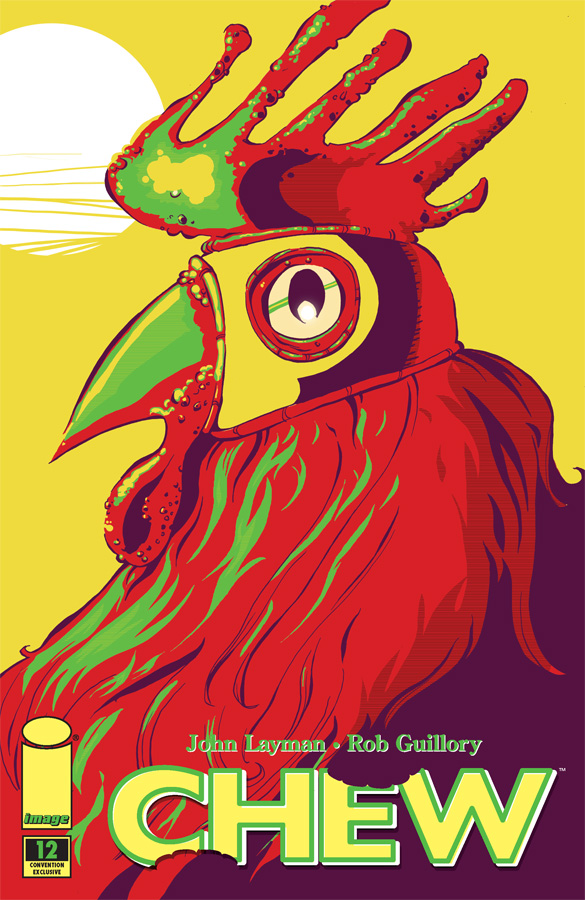 Image Comics is a comic book and graphic novel publisher founded in 1992 by a collective of best-selling artists. Image has since gone on to become one of the largest comics publishers in the United States. Image currently has five partners: Robert Kirkman, Erik Larsen, Todd McFarlane, Marc Silvestri and Jim Valentino. It consists of four major houses: Todd McFarlane Productions, Top Cow Productions, Shadowline and Image Central. Image publishes comics and graphic novels in nearly every genre, sub-genre, and style imaginable. It offers science fiction, romance, horror, crime fiction, historical fiction, humor and more by the finest artists and writers working in the medium today. For more information, visit www.imagecomics.com