Also, the second printing for the first issue’s sold out, so expect that to come around a third time!

2 July 2009 (Berkeley, CA) – Immediately upon release John Layman and Rob Guillory’s CHEW has experienced an immediate sell out for both issue #2 and the second printing of issue #1.

I’m shocked, pleased and flabbergasted by the enormous positive response we’ve gotten from CHEW," Layman said. "I can’t put into words how gratified I am for the readers and retailers who have helped spread the word about this strange and unique little book. I’m also grateful to Image for taking speedy action to help get this book into as many readers’ hands as possible. Thanks, everybody! The best is yet to come!"

CHEW’s star, Detective Tony Chu, is a cop with a secret. As a Cibopath, Detective Chu gets a psychic impression from whatever he eats. While it means he’s a hell of a Detective if he can stomach the evidence, once his secret gets out the government makes plans for him, whether he likes it or not. CHEW blends horror, mystery and the strangest ability of them all in an ongoing series of horrific crimes solved in the most horrific way possible. Since its release, the book has been receiving an immense amount of buzz, with many retailers directly contacting Image for as many copies as they can spare in light of the first issue’s now multiple sell outs. Even Layman’s fellow creators continue to talk up the book.

CRIMINAL writer Ed Brubaker said, "CHEW is one of the most original and intriguing new comics I’ve seen in years."

Image Comics Publisher Eric Stephenson added, "The last time we saw such a tremendous response to an all-new title was when we launched THE WALKING DEAD. By all indications, CHEW is on its way to becoming the next monster hit from Image Comics." 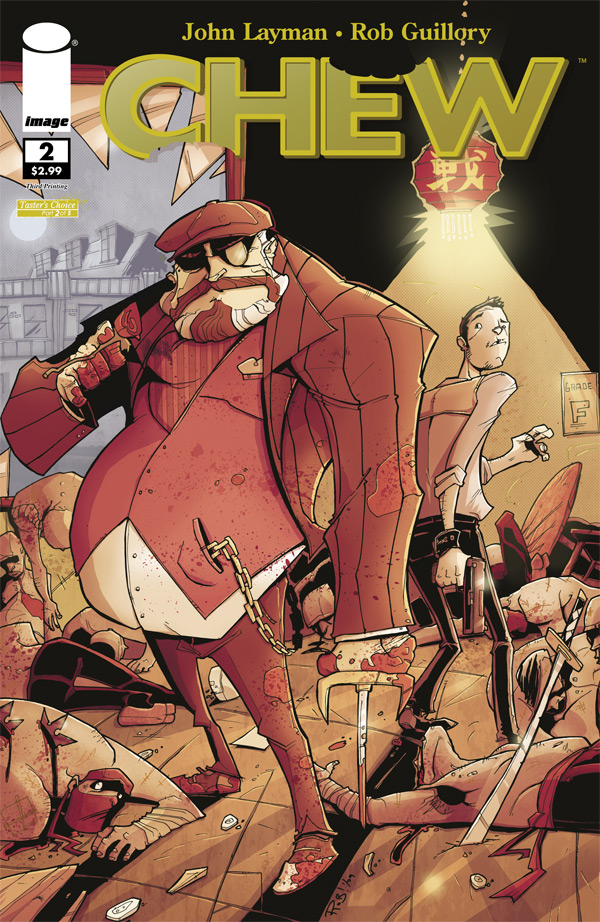