A Press Release recently came out about a personal friend of InvestComics. Jeff Balke is responsible for coloring Jay Katz’ very first comic book work in Vincent Price House of Horrors #1 (Bluewater Comics). Below is the Press Release. Congrats Jeff! And here is to the next 100!!

Jeff Balke, a comic colorist, has completed work on his 100th project.  This is a marker of having the drive, dedication and motivation to make it in this field.

A colorist is an artist who adds color to black and white comic images.  The use of color as a special effect, shading, and lighting helps express the mood, setting and scene in the comic. 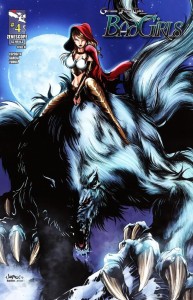 He works with Zenescope Entertainment who creates books such as Charmed, Grimm Fairy Tales, and Tales from Neverland.  He is also working with John Carpenter, the creator of the films Halloween, the Fog, and the Thing amongst others who is also putting out books with his wife, Sandy, and her company, Stormking Productions.

Jeff states, “I am extremely proud to be working in this industry.  I strive every day to one day work fulltime with any one company.  But until that time comes, I’m going to continue to work as a freelancer.  It’s a HUGE honor to be working in the field I’ve always wanted to work.”

Plans for the upcoming year include 27 comic book conventions all over the country including Arizona, Orlando, San Diego Comic Con, and New York Comic Con.  He is calling it his, “Coloring with Jeff” tour.

Jeff is a graduate of Warren Township High School in Gurnee and attended Columbia College Chicago.  He graduated from Disney University in 1999 with a DUCTorate degree.  When not traveling, he resides in Elkhorn, Wisconsin.