Every month on FFFIC, I tell you that Cullen Bunn and Brian Hurtt’s THE SIXTH GUN is the greatest comic that you’re not reading, and that you should all buy the trades, pick up the issues, and read this.

Well, here comes my “I TOLD YOU SO” moment.

DEADLINE has reported that NBC has ordered a pilot based on the book, to be produced by LOST‘s Carlton Cruse and written by Ryan Condal.

Here’s the DEADLINE Right up: 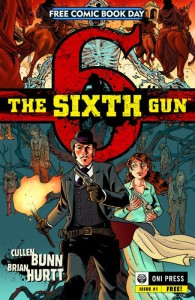 “Based on the Oni Press graphic novel, Sixth Gun is the story of six mythical guns in the Old West. When the Sixth Gun, the most powerful and dangerous of the group, resurfaces in the hands of an innocent girl named Becky Montcrief, dark forces reawaken. Vile men thought long dead set their sights on retrieving the gun and killing Becky. Only Drake Sinclair, a self-serving gunfighter, stands in evil’s way. Feature writer Ryan Condal wrote the script and will executive produce with Cuse as well as Eric Gitter and Andy Bourne of Oni Press’s sister company, film/TV producer Closed on Mondays Entertainment. The order adds to an already full plate for Cuse, who also executive produces the A&E series Bates Motel and the FX pilot The Strain, his collaboration with Guillermo del Toro.”

Now go, you have some reading to do.