InvestComics Comic Hot Picks for the week of 2-2-11

Hey everyone, welcome to another edition of InvestComics Comic Hot Picks. A bit of news to report on before we dive in..…. InvestComics started about 6 years ago as a free magazine that was printed at the local Staples or Kinko’s (whoever had the better sale that week, or a price break). It was distributed throughout South Florida in various comic shops. As of a few days ago, InvestComics has become a Corporation. InvestComics™ Inc. That’s kind of cool. It’s been quite the journey thus far, and the journey has just begun……

Now let’s get to the Comic Hot Picks!

DC brings some interesting things to look for this week. With Superboy #4, Psionic Lad is back as a “new hero”, but if you really want his first appearance, check out Action Comics #892. Legion of Super-Heroes Annual #1 teams up Legends Paul Levitz and Keith Giffen for the first time in 20 years! The first time these 2 legends ever appeared in the same comic was in 1976. They first appeared together, not as a working creative team in Kamadi, The Last Boy on Earth #44. This comic is priced at only $16. The first creative collaboration came only a month or 2 later on All Star Comics #62. This comic will only set you back $28. Not a bad price tag for a couple of legends teaming up 35 years ago for the first time. Back to the Annual comic now, there is a re-intro of a character named Emerald Empress. Her very first appearance ever was in Adventure Comics #352 (1967). A $100 will snag this one from creators Jim Shooter and Curt Swan. Superman 80 Page Giant 2011 features some new talent in the industry taking on the Greatest Superhero ever. Check out what some of these rookies have to offer, and you’ll be getting many “first works” in this book, so buy it.

The Independents rock and roll this week, and the featured guest of honor is H2O (One Shot) from Dynamite. This comic/graphic novel imprint will be a fantastic read from creators Grant Calof, Jeevan J. Kang and Liquid Comics. Get this, read it and enjoy it. It should be coming to your local theater near you in the future.  IDW has a hit on their hands. The first ever crossover event hits the Transformers in Transformers: Infestation #1. Look for this book to sell out quickly. Part 2 of the hit Obama/Palin team up in Archie continues this week in Archie #617.

All pricing on Comics in this article are courtesy of Comics Price Guide.com

Okay that’s it for this week.

This week on InvestComics™ TV we bring you Andrew Zar of Darkbrain Comics. If you haven’t seen Darkbrain Web Comics yet, do yourself a huge favor and head on over right here……..what are you waiting for?? Click it!! Andrew is breaking new ground with an innovative new approach to motion comics, and it’s simply awesome. Still reading this? How about you click on Mirror, Mirror starring Tabitha Stevens below…….see ya! 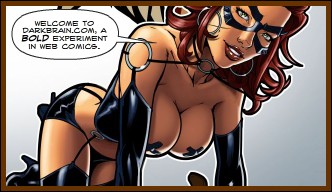