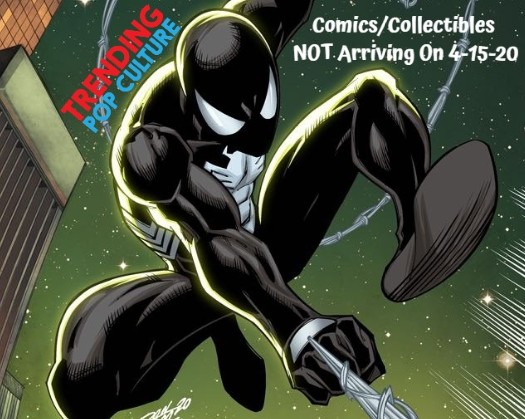 DUE TO DIAMOND DISTRIBUTION HALTING THEIR SHIPMENTS, THESE COMICS/ITEMS WILL NOT BE AT YOUR LOCAL SHOP ON APRIL 15TH 2020. TRENDING POP CULTURE WILL CONTINUE TO PROVIDE THE WEEKLY ARTICLES BECAUSE WE BELIEVE IN DELIVERING OUR FANS THE ENTERTAINMENT VALUE AND CONSISTENCY THEY COME TO EXPECT FROM US SINCE 2005. BE SURE TO BOUNCE BACK TO THESE ARTICLES WHEN NEW RELEASES PICK BACK UP OR READ ANOTHER OPTION BELOW. UNTIL THEN, BE VIGILANT AND BE SAFE.

InvestComics/Trending Pop Culture; SINCE 2005.
Here are this week’s top Trending Comics, Cover Art, Trending Collectibles and MORE NOT headed your way this Wednesday 4-15-20
Click on the RED links, Images or the comic cover to buy/bid from All available sellers on Ebay
Please note: New comic book releases and all items are subject to change

Batman #93 – The Batman vs Designer wraps things up, as it is the last issue before the Joker War begins. With the Joker War storyline and the red hot new character; Punchline, DC was about to embark on a hot season with their Batman titles. They’ll pick up the pieces when they come back, but at least they have something brewing to have fans super interested to look forward to. Marvel has the new Venom character “Virus” and their event storyline, “Empyre”. DC Comics looks to have the edge here.
Catwoman 80th Anniversary 100 Page Super Special #1 – With the origin of Punchline on the horizon (Joker 80th Anniversary 100 page Super Special #1), who knows what this super-size book could/may contain. Probably great stories and maybe a surprise.
Revenge Of The Cosmic Ghost Rider #5 – The final issue of Marvel’s once “Punchline” character. Creators Dennis Hallum and Scott Hepburn.
Empyre #1 – Marvel’s new epic event begins here. Creators Dan Slott, Al Ewing, and Valerio Schiti.
Captain Marvel #17 – Find out who or what The Nexus is. Captain Marvel teams with six heroes in this story, including that dude on the cover. Kelly Thompson writes and Francesco Manna pencils.

Symbiote Spider-Man Alien Reality #5 – The series finale. A possible big surprise awaits. Peter David and Greg Land.
How To Read Comics The Marvel Way #1 – This Marvel comic will literally do what its title is suggesting. The comic will guide you to which word bubble, panel, etc. to read next. It’ll show other ways to read a comic, but a word bubble guide? Wow, okay.
New Warriors #1 – So much controversy followed the trailer Marvel released for this comic preview. If you’re a comic reader/collector and do not know about this new series (YouTube video), you really have been living under a rock. As of this article being written, the New Warriors YouTube trailer has over 200k dislikes and just over 4k likes. That’s a huge margin. What does this mean exactly? Well, it means speculators would have/will be all over this one when/IF it ever arrives to your local comic shop. Also, it helps that all of these characters are first appearing in this comic. First appearances y’all! Does Marvel even care about the backlash it has received regarding the trailer and its content explanation from writer/creator Daniel Kibbelsmith about the new series? Probably not, but we’re not here to play sides or politics, because frankly, we don’t give a sh*t either way. One thing we have noticed is that every single cover to the new series shows the old New Warriors team from the 90’s on it. Why is that exactly? Writer Daniel Kibblesmith and artist Luciano Vecchio.
Children Of The Atom #1 – Much the same as the aforementioned, but worse, is the Marvel YouTube trailer for this new series. A whopping 25k dislikes and 1.7k likes. Ouch. Not too sure if the math is actually worse (margin wise). Not doing the percentage right now and again, don’t give a sh*t, but it seems bad. Because the numbers are so bad on this video, it will/may cause a ripple effect unto to collector’s aftermarket. Once again too, all first appearances y’all! Writer Vita Ayala and artist Bernard Chang.
Spider-Woman #2 – Learn the reasons why Jessica Drew has her illness. Writer Karla Pacheco and penciler Pere Perez.

Scout Comics, a constant here on Trending Pop Culture and our previous site (InvestComics). Not only a good company with a good product, but they’re a company that gets how most of this all works. Unlike Dark Horse, Image Comics, IDW and some others who we’ve promoted since 2005 (tagged, emailed, spoken to at conventions, messaged, etc.), never shared a link. We will continue to mention their books because that’s what we do, but guys/gals, seriously, get with it. Free advertising here for 15 years. Back to Scout Comics. They have three comics in this week’s post and if we recall can be purchased on their website (we think). Just click their name (above, blue link) and it’ll bring you straight to their website. The Everglade Angels #1 from Scott Lobell, Blake Northcott and Roc Upchurch. Assassin & Son #1 from Shad Gaspard, Marc Copani and Elder Messiah. And the last but not least, White Ash #4, which features the first appearance of Glarien. This from creators Charlie Stickney and Conor Hughes.
Giant Size X-Men Nightcrawler #1 – Superstar creators Jonathan Hickman and Alan Davis team up to bring this Nightcrawler story.
Sleeping Beauties #1 – New IDW publishing series from Rio Youers and Alison Sampson. Annie Wu cover.