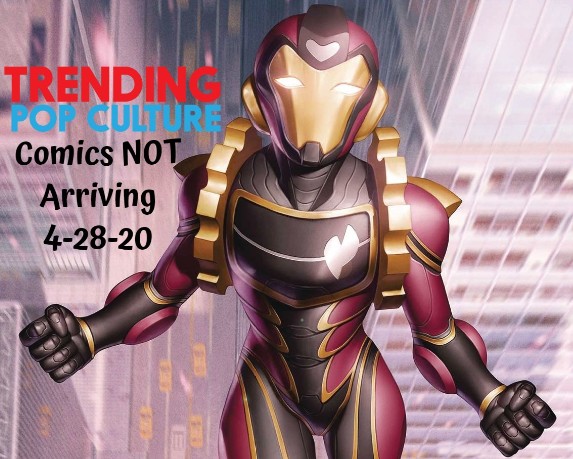 DUE TO DIAMOND DISTRIBUTION HALTING THEIR SHIPMENTS, THESE COMICS/ITEMS WILL NOT BE AT YOUR LOCAL SHOP ON APRIL 28th 2020. TRENDING POP CULTURE WILL CONTINUE TO PROVIDE THE WEEKLY ARTICLES BECAUSE WE BELIEVE IN DELIVERING OUR FANS THE ENTERTAINMENT VALUE AND CONSISTENCY THEY COME TO EXPECT FROM US SINCE 2005. BE SURE TO BOUNCE BACK TO THESE ARTICLES WHEN NEW RELEASES PICK BACK UP OR READ ANOTHER OPTION BELOW. UNTIL THEN, BE VIGILANT AND BE SAFE.

InvestComics/Trending Pop Culture; SINCE 2005.
Here are this week’s top Trending Comics, Cover Art, Trending Collectibles and MORE NOT headed your way this Tuesday 4-28-20
Click on the RED links, Images or the comic cover to buy/bid from All available sellers on Ebay
Please note: New comic book releases and all items are subject to change

The Amazing Spider-Man Sins Rising Prelude #1 – A Marvel villain first introduced 25 years ago in Peter Parker, The Spectacular Spider-Man #107 (1985) gets the spotlight in this one-shot prelude issue. Prelude; guess we’ll be seeing more of Sin-Eater. Written by Nick Spencer, art by Kim Jacinto.
Joker 80th Anniversary 100 Page Super Spectacular #1 – So many speculators had their eye on this comic. Probably still will once it’s released. However, It’ll be a better route for the specs due to the new world order. New release print runs will be down, thus the speculative market can charge a more exorbitant amount claiming its “rare” or a “short print run” status. All in the name of price gauging more. Look for those keywords and phrases to work their way onto eBay and all over the “expert modern market” once the ball gets rolling again. This comic contains the origin of the hot new character Punchline. A whole mess of top creators contribute and pay tribute to the Joker.

Ironheart 2020 #1 – Here’s more InvestComics talk for you…….Are you aware that the first (full) appearance of Ironheart, a 9.8 graded (Invincible Iron Man #9 2016) sold for almost $200 two weeks ago? With the rumors abound about Ironheart getting her own movie, it has caused the speculators to find more suckers to buy into the hype.  Such a great character, she ranked number 123 on the sales chart, Ironheart #3 in 2019 (canceled series?). The $200 spent must be spectacular hindsight and lots of praying that she comes to a theater near you within the next three years or so. That’s a long term investment that may never pay off. Maybe it will, but you could be a grown-up by the time it does come to fruition and you won’t give a sh*t anymore about this ridiculous modern market, losing monies thinking you know what’s hot and what’s not. Wow, It truly is fun being on the other side of this nonsense! That all said, this number one comic would have/will trend when it comes out. Writers Vita Ayala and Danny Lore with artist David Messina.
G.I. Joe A Real American Hero #275 – The last issue of the “Snake Hunt” storyline (part 10). As in the previous nine parts, every G.I. Joe character, ever, will appear.
Web Of Venom Wraith #1 – Wraith is back, in his own number one issue….again. Writer Donny Cates and pencils by Guiu Vilanova.
The Immortal Hulk The Threshing Place #1 – A one-shot Immortal Hulk story(?), creators Jeff Lemire and Michael Del Mundo.

The Marvel Empyre saga we were waiting on….will we ever get to see this story? Probably, But here are two one-shots that were supposed to hit; Empyre Spider-Man #1 (Taran Killam and Diego Olortegui) and Empyre Avengers #1 (Jim Zub and Carlos Magno).
Ninjas And Robots #1 – Keenspot’s new series from Erik Klaus and Katy Amacker.
Hundred Wolves #1 – New series from Vault Comics; creators Myke Cole and Tony Akins.
Widowmakers Red Guardian And Yelena Belova #1 – New Red Guardian story with the Black Widow. This must have had inspiration from that movie that was supposed to come out. Writer Devin Grayson and artist Michele Bandini.