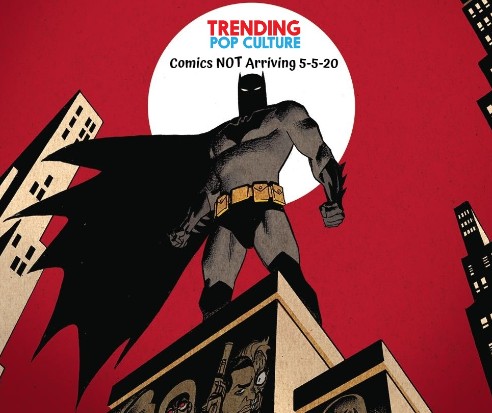 DUE TO DIAMOND DISTRIBUTION HALTING THEIR SHIPMENTS, THESE COMICS/ITEMS WILL NOT BE AT YOUR LOCAL SHOP ON May 5th 2020. TRENDING POP CULTURE WILL CONTINUE TO PROVIDE THE WEEKLY ARTICLES BECAUSE WE BELIEVE IN DELIVERING OUR FANS THE ENTERTAINMENT VALUE AND CONSISTENCY THEY COME TO EXPECT FROM US SINCE 2005. BE SURE TO BOUNCE BACK TO THESE ARTICLES WHEN NEW RELEASES PICK BACK UP OR READ ANOTHER OPTION BELOW. UNTIL THEN, BE VIGILANT AND BE SAFE.

InvestComics/Trending Pop Culture; SINCE 2005.
Here are this week’s top Trending Comics, Cover Art, Trending Collectibles and MORE NOT headed your way this Tuesday 5-5-20
Click on the RED links, Images or the comic cover to buy/bid from All available sellers on Ebay
Please note: New comic book releases and all items are subject to change

Black Cat #12 – A first appearance on the cover? Black Cat steals an Iron Man armor suit in this issue, then appears on the cover with it? Most likely that’s a new look/suit. Writer Jed Mackay and art by Carlos Villa.
Strange Academy #3 – Followers of this site already know where our speculative/InvestComics side lands when it comes to this series. To reiterate, in short form, buy the new release comics of this series. Buy the number one issue now, right HERE. InvestComics sees this series as having big upside. Creators Skottie Young and Humberto Ramos.
Man Bat #1 – Back in 1970, Man-Bat was introduced in Detective Comics #400. Fast forward 50 years, the Man-Bat gets his/its own series. Writer Dave Wielgosz and penciler Sumit Kumar.
Teenage Mutant Ninja Turtles #106 – The possible Introduction of a new villain. Sophie Campbell and Nelson Daniel.

Super Duck #2 – Here’s a series that will take off once the first issue gets in the hands of readers/collectors. This is not your typical all-ages “duck” comic. Archie Comics pushes the envelope a bit for writers Frank Tieri and Ian Flynn. Art by Ryan Jampole.
Juggernaut #1 – A new direction for this unstoppable force known as the Juggernaut. Writer Fabian Nicieza and artist Ron Garney reinvent the classic character and we are all invited for the ride.
Batman The Adventures Continue #1 – New Batman stories in the Batman Adventures animation tone. Writers Paul Dini and Alan Burnett, with artist Ty Templeton.
Daredevil #21 – New story begins “Truth/Dare”, from writer Chip Zdarsky and artist March Checchetto.
Scoot Presents 2020 – Scout Comics will present their new “adult” imprint; Scoot!. Not quite sure what the “adult” means as far as content. Swear words? Nudity? Blood and guts? Guess you’ll have to get this one dollar introduction comic and find out for yourself. Yes, one dollar. So, 18 and over? Maybe of legal drinking age, 21? Probably older than 18 are creators Don Handfield and Rafael Loureiro.

Xira #1 – Xira is an experimented monkey with a new baby that will now be used to experiment on as well. Momma Xira ain’t having none of that. It’s been documented by Marvel Comics that any monkey on one of their comics sold more copies for some reason. So much so they did a whole monkey variant thing for a bit, then had a monkey comic……that eventually failed, so no more (oh boy) monkeying around for Marvel. So, here’s publisher Red 5, with their monkey cover. Now go buy it. Writer Mauro Mantella and artist Diego Giribaldi.
Batman #94 – Probably the most anticipated Batman story in some time lays the groundwork right here. The “Joker War” will be a huge hit amongst readers and collectors. With the huge interest in the new character Punchline, any Batman title is of interest as well. The interest with this lays mostly with the expert modern speculators.
Captain Marvel #18 – Captain Marvel is the Supreme Accuser in this Marvel Empyre crossover. Kelly Thompson writes and Cory Smith draws.

InvestComics interrupts the regularly scheduled program for a lesson on speculation nonsense. Please, please put your big boy pants on before reading ahead. The whole staying in the house thing has gotten us in a foul-truthful mood. Hahaha! Just having fun too, so take a deep breath before forging ahead.

My Little Pony The Transformers #1 – Here’s a simple case of mashing two completely different franchises that makes zero sense. A ridiculous premise. Most expert modern speculators will say this to themselves, “I don’t even like My Little Pony, why am I buying this? I’m a grown ass man.” Expert speculative collectors will get bamboozled into thinking this comic is actually a collector’s item. Any cause for this comic to accelerate to any level in the aftermarket will be because the expert speculation collectors/sites have their agenda. For no reason other than to create a buzz to sell copies at a premium. The speculators/websites will push the 1 in 100 variant as a RARE, must-have comic. Scarcer than most other new releases? Yes. Must-have? No. Does anyone recall the My Little Pony variants that sold for more than a hundred plus dollars a few years ago? How about the Gem Comics? Same deal. No one, no one is paying an exorbitant amount of cash for these books anymore. No one. Lookup My Little Pony variants, completed items on eBay, and see for yourself. We are not telling you how to spend your monies (calm down fanboy), but spend it wisely. The modern market needs to get back to a place that is not dictated/controlled by sites or collectors for their own purpose of hyping a comic for their own benefit. Try selling a Hydro-Man first appearance at a premium. The first appearance cover of Knull is way overpriced over a…..rumor?? The absurdity continues with a laundry list of ridiculous comics that have tanked once their movie or television appearances were seen. Also, another disclaimer, we are NOT sh**ting on this comic at all or ANY comic for that matter. The My Little Pony/Transformers #1 comic will probably be a fun book, but a 1 in 100 cover variant here is not a smart investment. You know who NEVER talked up those Little Pony variant comics in past years, InvestComics. The GOAT. The InvestComics moto was and will always be, Invest Wisely/Read Comics. We separated ourselves from the craziness of recommending, essentially waiting for a movie/television announcement and acting as though the next HOT comic is Hydro-Man’s first appearance. Instead, InvestComics was gearing investors towards the first appearance of Sub-Mariner in 2010. Those expert modern speculators got played and even trolled from Sony in that movie. The ASM issue number appearing on a boat and no……Hydro-Man. Do not succumb to the hype and lose your hard-earned money. Spending $200 on a rumor is not a wise gamble. If you miss that boat, so what, they’ll be other ridiculous modern books to cash in on later on that you’ll find in the dollar boxes. Now back to the regularly scheduled program……

Harley Quinn And The Birds Of Prey #2 – Creator’s, Jimmy Palmiotti and Amanda Conner bring the second issue of the new series. Comic readers know they’re in for a treat as each new book hits.
Empyre Thor #1 – This comic will “change the Asgardian pantheon.” What does this exactly mean? Hopefully, this gets released and we find out.
The Grievling #1 – New series from Clover Press. Written by Steve Niles and art by Damien Worm.
Penultiman #1 – From Ahoy Comics. Writer Tom Peyer and artist Alan Robinson.
Stargazer #1 – New series from Mad Cave Studios. Writer Anthony Cleveland and artist Antonio Fuso.
Dose! #1 – From It’s Alive Publishing. Writer Sean Ellis and artist John Gebbia.