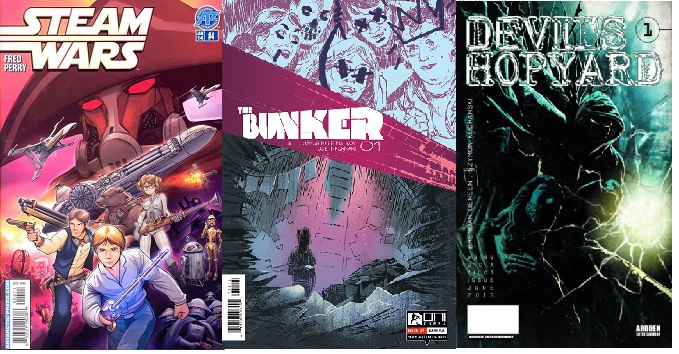 Retailers order new products 2 months in advance and must predict how well new comics will sell for them.

What happens every month is some titles are over-ordered and some retailers under-order.

As a stereotypical rule most retail shops will order extra heavy on all DC and Marvel titles knowing they might have potentially longer shelf life.  All other smaller publishers most retailers will NOT take the same risk with financially.

Let’s analyze the best selling comics of the past month.  In the following list I will make notes of any comics I believe stand out specifically for having higher or lower orders than might have been expected.  This will strongly affect the future back issue prices of these comics.

Batman holds continuously as the best selling ongoing series but sales have been down and sales this month were so poor in comic shops that only 1 comic sold over 100,000 copies.

Harley Quinn sales stay decently strong and each issue has been selling out and going to 2nd prints.   If popularity stays up the early issues could eventually become valuable for future collectors.

Walking Dead – same as Harley Quinn.  Orders are quite high but issues do sell out and many go to 2nd prints.  If the TV series continues for a few more years these issues are likely to see price increases for future collectors.  Walking Dead has 2 issues in the top 10 – this is a first for the title ever!

2014 is the year that Marvel is restarting all their series with new #1′s.  None of them had crazy high orders and since Marvel only prints whats ordered they all sell out and have 2nd prints immediately.

Ms Marvel had the most hype of the 4 and yet had the smallest order and sold out.  Marvel debuted other titles with even smaller print runs yet so these are the ones to watch out for if the public enjoys them.

Most of DC’s issues hit #28 this month and many steampunk variant covers that are all the rage right now. With the regular covers having print runs of only about 35,000 the variants will be a lot less common than the big print books.   Action / Wonder Woman etc.

Looking at the rest of the list with a quick overview I will mention titles that I think the print runs were too high or too low.

If the print runs were too high then those copies are just gonna sit on shelves.

If the print runs were too low it likely sold out immediately at Diamond and in comic shops and has the best chance of all new comics to go up in value quickly.

As usual most Marvel/DC/Dark Horse comics do not sell out and retailers take bigger chances making these books unlikely to ever go up in value.

Black Science #4 came in at a decent 26,000.   This was the best selling Image comic of the month (not counting Walking Dead). Sales have only slightly picked up so its likely going to be another sellout for this issue which keeps going to 2nd prints.

Lazarus and Deadly Class are the only 2 other Image titles that still sell over 20,000 copies.  Image sales overall keep dropping on almost all titles.

Once again Image comics debuts a bunch of new series this month and the sales keep dropping month to month.   Any quality books are selling out quickly in advance at Diamond and retailers are not taking any chances.

Here are the Image comics that sold less than 5,000 copies this month:

Bunker #1 10,300 – sold out instantly with talks of a new movie – instant price increases.

Turok Dinosaur Hunter #1 – many variant covers with print run of 30,000 – still a high number and it did sell out but the variants will have over inflated demand so hard to say the future of this one.

Vampire Diaries #2 – TV show from DC major publisher but print run only 6,000 – either demand is not there any longer or retailers are not taking any chances.

GI Joe Comics – there are a lot of new series released each month but most have print runs only about 5,000 – long run these books could be harder to find.

DC Villains Month 3D cover 2nd print complete set – only 2,200 sets at $199.99 were made making these 2nd print 3D covers very rare for a DC product.   Demand could possibly grow for the more popular ones like Jokers Daughter and Harley Quinn.

Manifest Destiny #1 – 3rd printing – print run only 1,800 copies – demand is so high for this title that 3rd print might go up in value.