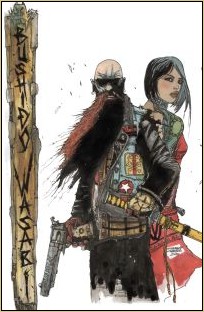 London, UK – October 9th, 2010 – Com.x’s lone samurai will be slicing and dicing his way to shelves soon. If he can keep his mouth shut for long enough.

The ancient code of honour, known as Bushido Wasabi, states:
“There ain’t nothin’ a big gun, a sharp sword, and a smart mouth can’t fix.”
Ronin Ray Tashikawa is the embodiment of that philosophy. Making a living as a gun-for-hire, Ray’s latest job has left him facing a greater foe than he could ever have imagined. Is Ray strong enough to fight for what’s right, or will that smart mouth send him to his grave?

“We’ve been big fans of Stefano’s work for some time,” said com.x Publisher . “It’s fantastic that we’re now working with him and the team over at Azurek.”

About Com.x
Com.x is an ingenious, independent comic company that has been creating unique, innovative and highly respected intellectual properties for the last ten years. Based in London, England and Venice Beach, CA, USA, its titles cover a wide range of subject matter, from traditional superhero books, like CLA$$WAR, through modern reinterpretations of the graphic novel such as Andi Ewington’s “45” and dark horror, RAZORJACK.

Com.x prides itself on seeking out new creators and giving them the chance to bring their unique visions to new audiences.

About the Creator(s):
Busihido Wasabi was created by husband and wife team, Stefano Cardoselli and Rita Gorgoni.

STEFANO CARDOSELLI is a Tuscan born artist, who’s been in comics since 2000. A frequent contributor to Heavy Metal Magazine, HM Editor in Chief Kevin Eastman has said: “Stefano Cardoselli — I HATE this guy! I’ve only published everything he’s sent me! I think he can draw his ass off, and look forward to his next contribution.” Stefano has also worked with 2000AD, Antarctic Press, Blue Water Comics, Dark Slinger Comics, and 407 Studios, just to name a few. In 2001, with his wife Rita Gorgoni, Stefano founded Azurek Studios, which specializes in comics, toys, and animation.

ALEX RODRIK is a freelance writer, editor, and columnist. Writing for Comics Bulletin since 2007, Alex is the current Editor of Features and Interviews for the site, as well as writer of the column Working Title. Along with his various writings, Alex has been a guest speaker at the “Graphic Novels in Education Institute” intensive hosted by Reading With Pictures and Northwestern University. Coming this November, Alex will be a presenter and moderator at the Miami Book Fair International.