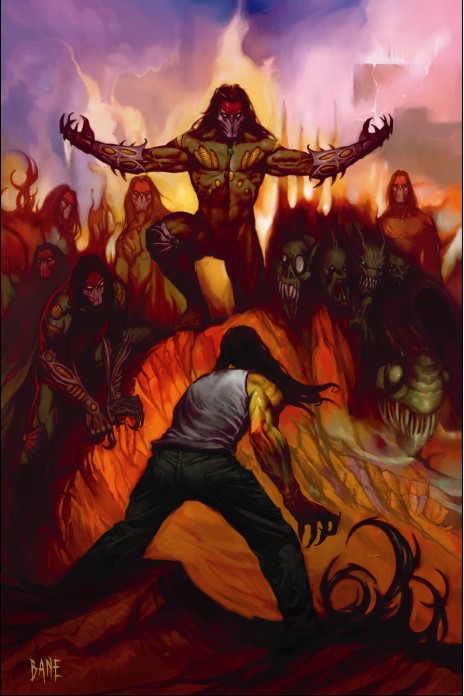 In the wake of Top Cow’s announcement of THE DARKNESS II video game for the Sony Playstation 3 from 2K Games, Image Comics and Top Cow Productions will present a new six-issue story arc entitled “Outer Darkness” for the ongoing comic book that started it all. Beginning in THE DARKNESS #90, Darkness bearer Jackie Estacado will be forced to confront his ultimate enemy.
Having previously dispatched The Sovereign, Jackie Estacado was hoping to finally have some time for quiet reflection. However, it soon becomes apparent that his introspective plans will be interrupted when assassins come looking for him. Estacado must quickly discover who has sent these assassins, but things get increasingly complicated when The Foreigner returns to warn Jackie that the enemy he should really be watching for is the one within!
This high stakes story is brought to life by artist Sheldon Mitchell, who is returning to THE DARKNESS for this arc, along with inkers Sal Regla and Rick Basaldua as well as colorist Felix Serrano. This creative team will illustrate the story arc that begins to wrap up acclaimed writer Phil Hester’s long run on THE DARKNESS, which ends with issue #100.

“It seems like I started on THE DARKNESS just yesterday,” Hester reminisced. “To know that there are four trades out there now is kind of mind-boggling. Time does fly when you’re having fun, and working with Sheldon Mitchell, as well as artists like Michael Broussard, Jorge Lucas, Romano Molenaar, and Whilce Portacio certainly qualifies as fun.”

Hester added, “I hope it’s as fun to read as it was to write. I’m not given to hyperbole, but this next year of THE DARKNESS is going to come at you hard and fast!”
“Phil Hester has put together what I believe will one day be looked at as one of the definitive runs on THE DARKNESS and “Outer Darkness” begins the culmination of the third arc that Phil wanted to tell when he first pitched for this series,” said Top Cow Publisher Filip Sablik. “Sheldon Mitchell has really stepped up his already impressive game and is delivering some of the best art of his career. “Outer Darkness” promises to be a tense, high stakes arc fans won’t want to miss!”
THE DARKNESS #90, a 32 page full-color comic book will be for sale in stores on March 2, 2011 for $2.99.