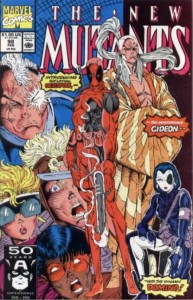 The new Deadpool comic is arriving on 9-10-08 from Marvel. Check out this article that was originally written on March 20th 2008 . It gives a few Deadpool comics you should be searching for before Deadpool makes his huge return into the Marvel Universe. Yes, The Merc with the mouth, Deadpool, is coming back and he’s going to become one of the hottest Marvel characters in quite some time. Remember how hot Wolverine was at one time? You remember The Punisher? We’re talking that hot. This article contains some KEY issues in the Merc’s ‘short’ career that you should be getting before it’s too late.

Marvel is starting the push of a character that they think will be a huge part of the MU. The likes of which might seem very innocence at first, but is going to turn into a, shall we say, a Wolverine type overkill. Remember how the Punisher was in what seemed to be every other Issue in the MU in the 80’s? Remember the same for Wolverine in the 80’s and 90’s and even now? Well here’s the scoop Investors, the character Marvel is going to throw at you for the next few years to come is…….(drum roll please)…..Deadpool!

Yes Deadpool will be a household name in a couple of years, bank on it. Here’s a few reasons why.

The first reason, the most oblivious one is that the character is extremely appealing. Ever since Deadpool was introduced to the comic word in 1991 the comic world has embraced him. Mr. Wade Winston Wilson has that certain quality in a character that fans absolutely love. His abilities, Healing factor, Superhuman strength, his marksmanship, martial arts and many more. These powers sound a lot like a hairy, attitude, claw ripping mutant? Basically Deadpool has what Wolverine has but without claws. The second reason is the fact that Marvel is going to give Deadpool his own regular monthly series in August. The best news comes from Editor Aubrey Sitterson at the most recent Comic Con in L.A. He says “”It’s not a Deadpool series off to the side; It’s in the center of the Marvel Universe.” Let us explain what this really means.

The new X-men Origins Wolverine movie is going to feature many MU characters, but the one that Marvel is keeping an eye on is Deadpool. Marvel has already stated that they are possibly looking at a Deadpool spin off from the Wolverine movie. That being said, Marvel is going to push Wade to front and center in the next year or so in the Marvel Universe. Why you ask? He’s not the Hulk, Wolverine, Spiderman, Fantastic Four that’s why. People in the general public just don’t know Deadpool. Hell some comic fans don’t even know much of him! He’s not iconic enough like the characters mentioned and Marvel knows this. Deadpool will get lots of airplay in the year to come, be ready! Here’s a few Issues you need to pick up for a minimal amount of cash now and cash out big much later on. 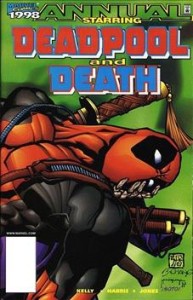