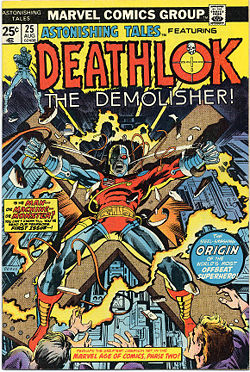 Colonel Luther Manning, a soldier who, after being near-fatally injured, woke up in the body of the experimental cyborg named Deathlok in the post-apocalyptic future. Look at that cover! The great George Perez penciled this issue! Sweet! Deathlok is one of those characters that are right on the cusp of greatness…a few times. Marvel has tried time and time again to push Deathlok but to no avail, Deathlok falls flat. The character does have a fan base though. Marvel has hinted at bringing Deathlok back a few times into the main stream but with the “blessing” of amazing artistic talent in today’s industry, comes the even more amazing writers. Whedon, Diggle, Waid and Johns to name a few. Deathlok might and most likely will have a very big resurgence into the market. Hollywood for years has looked into a possible movie staring our favorite cyborg. Marvel Studios is going to put out quite a few movies in the next few years. Deathlok is almost a lock to set his sites on some screen time.