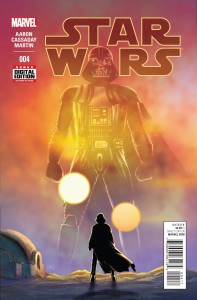 (BALTIMORE, MD) — (May 15, 2015) —Luke Skywalker’s quest to become a Jedi leads him back to Tatooine in Jason Aaron and John Cassaday’s Star Wars #4 from Marvel Comics, the best-selling comic book of April 2015 according to information provided by Diamond Comic Distributors, the world’s largest distributor of comics, graphic novels, and pop culture merchandise.

The survivors of the zombie apocalypse face a new and insidious threat in Robert Kirkman’s The Walking Dead Volume 23 from Image Comics, the best-selling graphic novel of April and one of the publisher’s four volumes among the top ten. Marvel Comics’ original graphic novel, Avengers: Rage of Ultron, by Warren Ellis and Jerome Opena, ranked #2. DC Entertainment had four titles in the top ten, led by Bill Willingham’s Fables Volume 21: Happily Ever After at #23.

DC Collectibles continued their Batman Animated series of action figures, based on the animated series of the 1990s, in April with the Batman: The Animated Series: The Joker Action Figure, the month’s best-selling toy and one of the four products the manufacturer placed in the top ten. Diamond Select Toys had three products in the top ten, led by the Star Trek: USS Enterprise NCC-1701-A Ship at #2.

Based on the new film, WizKids/NECA’s Marvel HeroClix: Avengers: Age of Ultron Foil Packs were April’s best-selling gaming product and one of their six products among the top ten. Diamond Select Toys’ Jay & Silent Bob Monopoly, March’s best-selling game product, remained in the top ten in April at #7.

How does Diamond calculate the charts? It all starts at the comic book shop.

Data for Diamond’s sales charts — which includes the monthly market shares and all top product charts — are compiled by Diamond Comic Distributors from sales made to thousands of comic book specialty shops located in North America and around the world.  Additional sales made to online merchants and other specialty retailers may be included as well.

Unit and dollar market shares are calculated based upon orders for comic books, graphic novels, and magazines invoiced and shipped to Diamond customers during any given month, which comprises pre-orders, advance reorders, and reorders, minus any copies that are received back from a title marked as returnable. Please note that comics marked with an asterisk (*) have had their reported quantities reduced due to retailer returnability, and thus may rank lower on the charts than their actual sales would reflect.

The New Titles Count Chart includes all titles that were invoiced by Diamond to retailers for the first time during the month and is not the official solicited title count for the month. Variant edition comic books and graphic novels at the same price point count as a single SKU. Variant edition comic books, lenticular covers, digital combo packs, and graphic novels at different price points count as separate SKUs for each edition.

ABOUT DIAMOND COMIC DISTRIBUTORS (DCD)—Diamond is at the nexus of comics and pop culture merchandise. Based in Baltimore, MD, DCD is the world’s largest distributor of English-language comic books and pop-culture related merchandise, servicing thousands of specialty retailers worldwide. For more information, visit Diamond on the web at www.diamondcomics.com.