Horror has a new outlet this December as Daniel Crosier and Jimmy Palmiotti unite to bring us this comic based on the Distortions Unlimited Studio.

The three issue series is based off of licensed characters crafted by Distortions Unlimited based in Greeley, CO. Distortions is world-renowned for creating shocking props, masks and animatronics that have been the mainstay of the dark amusement industry for the last 30 years. The company is best known for reproducing the 16ft queen alien from the film “Alien” cast from the original molds, as well as designing the stage props for music industry icon Alice Cooper’s Brutal Planet tour.

Daniel Crosier, writer and illustrator on the series, has a unique connection with the project. “I grew up near the Distortions studio in Greeley. I used to tour the studio when I was a kid and was fascinated by their creations. I suggested to Darren Davis the president of Bluewater to partner with Distortions to develop another horror comic. Darren liked the idea, so we approached them with the concept. Distortions was enthusiastic about the partnership and green-lighted the project.”

The entire series focuses on Distortions’ Rage animatronic. Described as half Neanderthal, half beast, and all fury, the Rage is one of Distortions’ most popular characters. Ed Edmunds, president of Distortions elaborates of the protagonist of the books. “Rage has been a fan favorite for years. The sheer size of the piece commands attention and really gives people a good scare. He’s a great character to base the series on.”

The first issue of the series delves into the horror unleashed on the earth with the collapse of a mine. The plot was crafted with multiple, intertwining layers that combine fantasy and true-life events ripped from today’s headlines.  Local Denver celebrities, Uncle Nasty and Matt Need from Clear Channel’s KBPI and Allana Rizzo from Rocky Mountain Fox Sports Net have lent their likeness to the project.

Crosier will bring a unique look to the books by illustrating with his watershed technique. All covers and interior pages of the series will be created with graphite on wood poplar panels. Crosier’s influence for the series is Dark Horse’s “B.P.R.D. 1946”. The books will have a high contrast, distressed, organic look.

The creative team will also include veteran inker Peter Palmiotti. Palmiotti has worked for a variety of comic publishers including Marvel Comics, DC Comics, and Image.

The release date is for the first issue of Distortions Unlimited will be December of 2009. 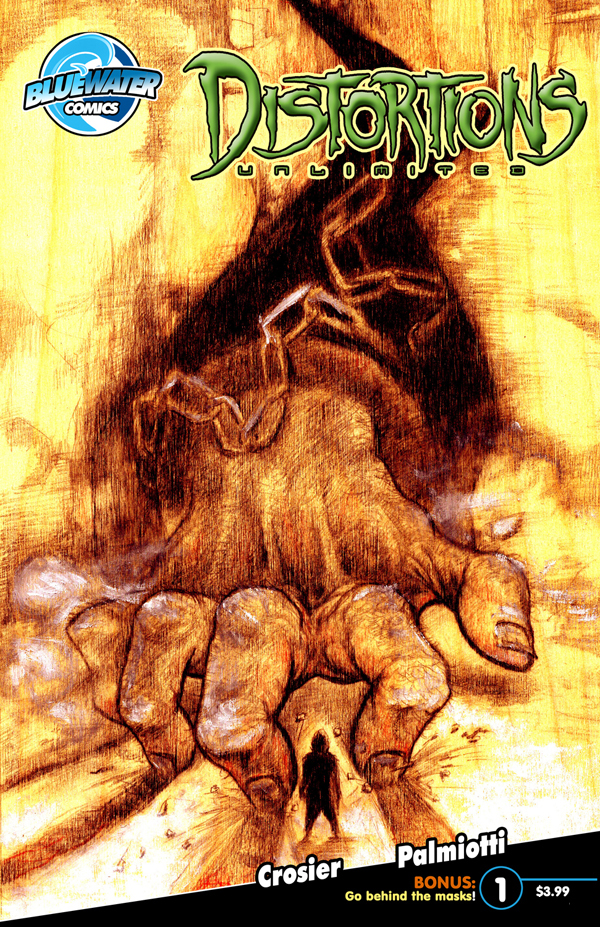