It must be some sort of webcomic.

It is!  More information inside. 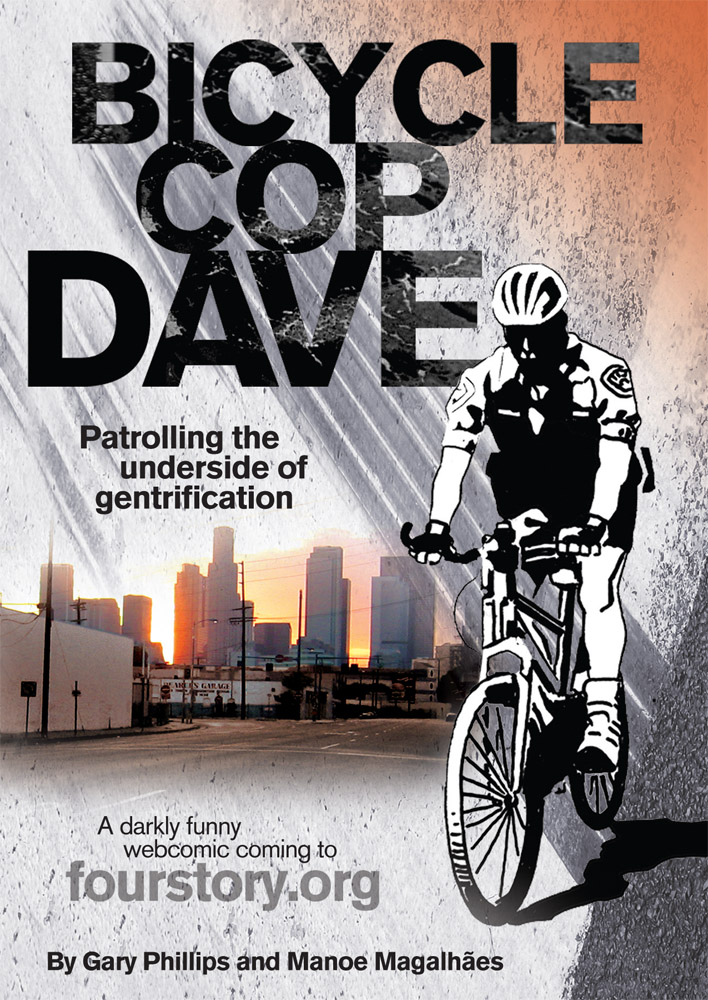 Set in a downtown Los Angeles where gentrification seeks to displace the homeless, where loft dwellers walk their little dogs past dark alleyways from which the sickly sweet smell of something else wafts, police officer David Richter patrols this mixed area on his trusty bike.

Said Phillips of this effort, “While I write crime and mystery stories, they’re not just whodunits or simply about chasing the McGuffin. My background is in community organizing and working for social change nonprofits. This is reflected in my books like Violent Spring, set after the ’92 riots to my recent World War II historical novel, Freedom’s Fight wherein the lives of black soldiers and civilians during that period are examined.”

He further remarked, “So Bicycle Cop Dave unfolds on several levels as we follow Dave’s quixotic day taking us into various environs of the changing downtown Los Angeles. He encounters interesting characters from a lawyer smoking crack in a port-a-potty to a one-armed prophet in a Skid Row bar with his wooden tablet of odd commandments. Oh, and there’s a couple of bodies hung upside down below the Sixth Street bridge and some big time development hanky-panky going on too.”

The first three pages of Bicycle Cop Dave premier on October 28 at www.fourstory.org and new pages will be up every other Wednesday thereafter until the first 22 page episode is done — with more to come after that.

About FourStory
FourStory is a website that advocates for fair living conditions for everyone, finding stuff that’s unfair, off-kilter, and just plain stupid about our society and dissecting it in interesting ways. A force for social justice, intent on illuminating life in 21st century America, and what’s right and wrong about it, in every possible way. FourStory’s is edited by mystery writer Nathan Walpow.