Skip to content
FARLAINE THE GOBLIN #1 first issue is in stores this week on September 25th 2013
Top notch artwork and a very small print run!
Retailers were sent an advance copy a few months ago. 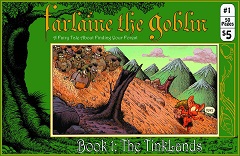 This is a fairy tale. 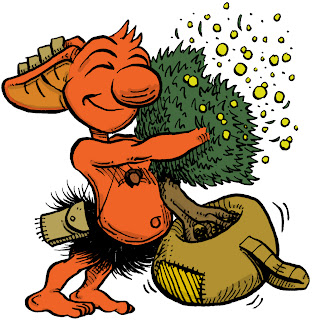 This week Terry Hoknes at www.HoknesComics.com spoke with Studio Farlaine(www.Farlaine.com) who explained the comic story and makes sense of the various printings.

This week #1 comes out shipped through Diamond to all comic stores. This is the first time its been available in a mass print run to the public, however its not the first printing as a promotional copy was printed a few months back. In total about 300 stores in North America received 1 advance copy of #1 – the first promo printing, in addition to fans that picked up early copies of the book at the Boston and Baltimore Conventions.

After that point, a fire at the printer destroyed much of the remaining stock, requiring a new printing to fill Diamond orders. The new printing is an improvement and there are subtle changes making this a unique printing.

To confuse matters #1 was originally listed by Diamond as shipping to stores on July 17th(this was the promotional copies), and then combined with the fire the September release date was pushed back. These delays and changes made it harder for retailers to order copies during July and August as the Diamond ordering system was confused about whether the book was sold out or just not available.

Farlaine the Goblin, a tree goblin shaman from the Forest of Fin-Din, has spent years wandering the very many Oddlands of Wug in search of a forest to call his own. He only has 10 lands left

Farlaine has been searching for years. He’s had a lot of failures. His tree is getting a little beat up. He only has 10 lands left to explore of the hundreds he started with. None of the remaining options sound promising, and if he finishes exploring the world without finding a forest, poor Ehrenwort will wither and die, and he will wander like a ronin forever.

TH: I recall Farlaine #1 was scheduled to come out on July 17th and at the time Diamond was saying no more copies were available – but now i’m wondering does that mean it sold out OR was it due to the delay that they just were saying none were available?

SF: Ahh, this was a Diamond mistake. The book was only solicited in July and we sent off 300 free copies that month. Somehow they slipped into Diamond’s system as normal books, so suddenly all of these sites started reporting that book 1 was being released in mid-July. That was only the free copies. The book was scheduled for September 4th since the beginning, and only shifted after the fire.
Farlaine 2 was solicited in August and will come out in late October. I haven’t heard sales numbers yet but expect them to trickle in sometime in the next week. What’s funny about this book is that we also sent off free copies, 450 this time, but they arrived late!! So they would only have gotten to stores last week, after the deadline. Diamond had discussed possibly ordering extra surplus in case late orders came in, but I never heard any more about that. So I would not be surprised if book 2 sells out just because of the timing glitch!

TH: Which brings up a question of #2. Are there then 2 printings of #2 as well? The first batch you printed up for promo but then you are going back to the printer for the official solicitation?

SF:
Yes, that’s right. We did a first printing in time for promo copies and reviewers, but since we didn’t know the sales number for even book 1 yet, we didn’t know how many to print for the public. So when we got the orders for book 2 we did a second identical printing using the same files. Book 3 will only be a single printing.

In both cases, books 1 and 2, I printed a few hundred extra copies for conventions and people buying through the website. On the positive side book 3 orders won’t be due until after book 1 is out and we’ve hit the NYCC, so hopefully those orders will go up(we’re also finally offering ‘buy 5, get 1 free’, which was supposed to be offered on the first two books but wasn’t).

TH: Tell me about the print run of the #1 1st customers printing, the “fire printing”.

SF: They came in at 1,350 copies. My original expectations were lower than that, figuring a minimum of 700 and ideally 1000, which makes 1,350 seem downright spectacular!

TH: To complicate issues on August 15th, due to a fire at the printer, all the early printed copies of Book #1 were destroyed and the comic would have to miss the original release date of September 4th, which is why it was delayed again until September 25th. I have been constantly monitoring Diamond every day for the past two months to see how many copies are available and if they are even available for order I found most of the time I could not order any copies as the system had to deal with a July 17, September 4th and September 25th release date.

SF: Yes, very unfortunate for sure. Who knows what the orders would have been like without the mixups and confusion!

TH: An amazing new comic book, top quality story and artwork, unique format and small print run make this all a great book to check out. 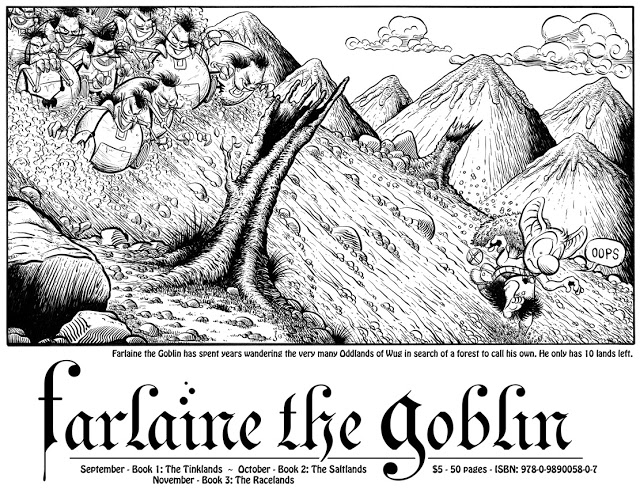 If your local comic shop is sold out today contact www.HoknesComics.com or hoknes at hotmail.com to order copies as this will sell out quickly !  Diamond Distributors is already sold out in advance of release date.