InvestComics Publications received the last shipment (First printing) of our first ever publications comic ‘The Dawning #1’. Look for an InvestComics Newsletter coming in your inbox to be the first to snag a copy! InvestComics will be giving out FREE SIGNED copies to those who make and send a short video (5 to 10 seconds) professing your love to InvestComics. Send your video to either dropbox or wetransfer to contact@trendingpopculture.com. Be sure to sign up to get your newsletter at the end of this article. 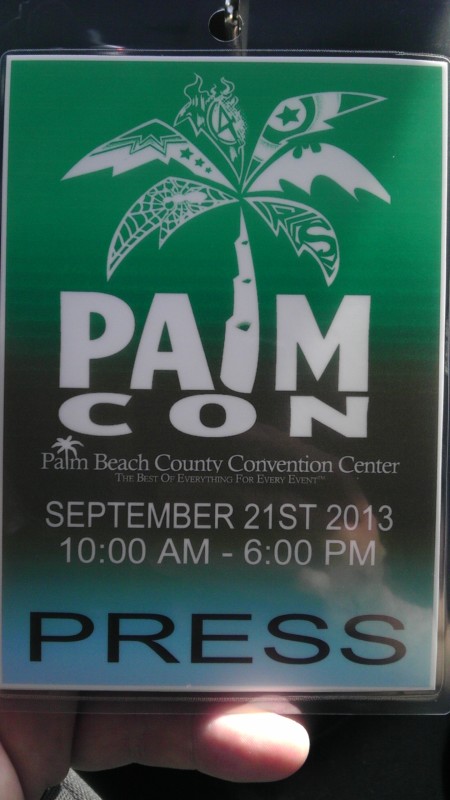 Saturday InvestComics visited an old friend with a dream and a passion coming to life for him. Martin Pierro of Cosmic Times Publications has done something that has been sorely missed in the West Palm Beach Florida area for quite some time. He started a comic convention appropriately named ‘Palm Con’ 3 years ago. The first 2 years were held in the American Polish Club in Lake Worth Florida. The show quickly outgrew the space needed in the first year, forcing to rent more space the second year, and now this year the show resided in the West Palm Beach Convention Center! Yes Martin is on to something here. In speaking with Martin for the brief few minutes we had at the show (he was a runnin’), you can see and feel the tenseness of the hard work he put into this show. He’s worked hard for this and it shows. In speaking with Andra Walt (mama), one can hear the proudness ooze off of every word, and justly so. Martin Pierro’s Palm Con has arrived.

InvestComics was invited to the event and came out with a few pictures and some video. Those will come out in the days to come. Overall the show had a nice crowd and people were really enjoying themselves. The guest list included Ethan Van Sciver, Deep Roy, Brutus the Barber Beefcake, Allen Bellman, Jose Delbo, Carlos Castellanos, Jeff Dekal, Jessis Melero, Vinnie Tartamella, Creature Entertainment, and a host of others.

As already said, Martin Pierro is obviously on to something here. The West Palm Beach area was in dire need of some sort of comic book entertainment forum and Martin will provide this to the genre for years to come. I personally am very proud of him and look forward to the years ahead. Thanks for the invite Palm Con, I had a blast!

There will be some more news on the horizon from InvestComics, so sit tight. It’s very exciting, but cannot speak about anything until confirmation comes in. Such a tease right?

Let’s head into the DC 3D books for this week. Seems like forever now with these books no? How’s that saying go? Too much of a good thing is bad for you?  Well what seemed to be a fun idea is starting to run its course. The 3D covers are nice and all, but the 90’s are calling and they want real comic book covers back.

As InvestComics has done for the collectors each week regarding the 3D covers, we will present the comic and the first appearance of the villain takeover of that particular book. As the weeks pass, it looks as though the field is getting very thinned out. But this shouldn’t deter the collector, it only takes that ONE book to hit and you have chaos within the aftermarket. Be smart about which books to pick up as far as the speculation market goes, the story and the actual character (and print run sometimes) is what causes “that” particular comic to uptick. Not because of a pretty cover.

Wonder Woman (2011 4th Series) #23.2 – Wonder Woman never really had the rouge gallery that stood out from most, and this week it’s a case in point with ‘First Born’ taking over the WW book. First Born debuted in Wonder Woman #12 (New 52).

Superman (2011 3rd Series) #23.4 – Staying with the Superman talk we have another one of those huh? Characters. The much bigger purple blob thing names ‘Parasite’ visits Supes. Back in 1966’s Action Comics #340, Parasite wasn’t on the roids yet and wore green shorts. The big question is will Parasite wear his green shorts in the new Superman Parasite book?? The tension mounts!

Aquaman (2011 5th Series) #23.2 – Moving right along here, Ocean Master, yes Ocean Master will give Aquaman his problems in his own book this week. Ocean Master. Okay, just like saying that for some reason. OM first appeared in Aquaman #29 (1966). All joking aside, maybe OM will be Aquaman’s nemesis in a film or television show one day. Image that…?

Justice League (2011) #23.4 – The ultra-cool Secret-Society will have the rights to the new JL book this week. Look for Secret Society of Super-Villains #1 from 1976 for their first appearance.

Batman (2011 2nd Series) #23.4 – One of four Batman titles coming out this week. Overkill? Anyway, one of Batman’s biggest adversaries to ever come along after Bats was introduced all of those many moons ago was Bane. Just like Spidey had Venom, Bats has Bane. Not saying that the rest of their rouge galleries are a weak one, but to have a villain come out of the modern era and make such an impact like they have is a big deal. Bane has already been covered in two Batman films. Now granted the first one doesn’t really count, but it did happen and that accounts for something. It wasn’t until the second go around that Bane became the total bad as* that the character should have portrayed. The villain was spot on in The Dark Knight Rises, a fantastic film and a fantastic villain. Do yourself a favor, if you do not already own the first appearance of Bane in Bane: Vengeance of Bane Special #1 (1993), you need to. Although a big print run keeps the cost down a bit, it’s still a wonderful book to have.

Justice League Of America Vol 3 #7.4 – Just like the aforementioned, Black Adam is a total bad as*. This dude needs to appear in a film, stat! Check out Adam’s debut in Marvel’s Family #1 from 1945 (Fawcett Comics).

Green Lantern (2011 4th Series) #23.4 – Too bad the Green Lantern didn’t get as much love as it did. Fans were not at all pleased with the film as box office numbers would show. Sinestro however will remain a main staple in the GL gallery. Look carefully through Green Lantern #7 (1961) and there you will see Sinestro’s first appearance.

Batman Superman (2013 DC) #3.1 – Speaking of movies fans are not receptive to, the new Superman/Batman movie seems to be getting dumped on because of the actor choice Ben Affleck playing Batman. Don’t forget that InvestComics supports Ben as Batman on the Facebook page: ‘Affleck as Batman – I’m On Team Ben’. Click HERE to join the crusade against the naysayers! Any who, within this takeover issue we have the only “thing” to ever “unofficially” kill Superman. Doomsday first appeared in Superman: Man of Steel #17 (1992). Just like Bane and Venom for their respective rouge galleries, Doomsday has become “that villain” within the Superman gallery. A late, modern introduction that has caught on and never let go. Doomsday in the Superman/Batman movie? Hey you never know!

Batman The Dark Knight (2011 2nd Series) #23.4 – One of the hottest “surprise” issues to come out recently is the Catwoman #23 (New 52) book. The aftermarket went bonkers when word got out that this comic contained the first appearance of the Joker’s daughter. This week the Joker’s daughter will make here “second appearance”. Don’t miss this comic, it’s definitely a sellout book.

Detective Comics (2011 2nd Series) #23.4 – The last of the Bat books has Man-Bat gracing the 3D cover. Sometimes a simple switching of a word can create a new character! Although not a recognizable, oh my God I need to buy the issue with Man-Bat in it, it’s the first appearance that’s more appealing than anything. Check out the debut of Man-Bat in Detective Comics #400 (1970). A story drawn by legend Neal Adams and a classic cover by Neal to boot! Good stuff here.

Marvel Comics debuts the new Sun-Girl in Superior Spider-Man Team Up (2013) #3. Sun-Girl is a great looking 70 year old character. Check out the first appearance from back in 1948’s Sun-Girl #1 from Timely Publications! That’s pre-Marvel folks.

Also from Marvel,  check out Infinity Heist (2013) #1 and Punisher Trial of Punisher (2013) #1. With any kind of buzz with these two comics, they will be sold out very quick.

Speaking of sold out comics, if these comics bring it, expect the aftermarket to be a buzzing. Farlaine The Goblin (2013) #1 stands right in front of this line (Interview right now on InvestComics with creator Studio Farlaine!! Click HERE!). Sold out at Diamond Distributors, get your hands on this comic if you can. Zombie Annihilation One Shot from SILVER PHOENIX ENTERTAINMENT is also sold out at the distributor level. Other Dead (2013 IDW) #1, Powerpuff Girls (2013 IDW) #1 are sold out as well.

On the cusp of second prints are Sex Criminals (2013) #1, Super (2013) #1, Rat Queens (2013 Image) #1, and Planet of the Apes Giant (2013 Boom) #1. As always mentioned here, Image Comics have been on a serious roll lately. Their products have been outstanding. Watch out for the sell outs of their comics, because interest will eventually reach the “another” medium as Hollywood will start picking off some of their stories.